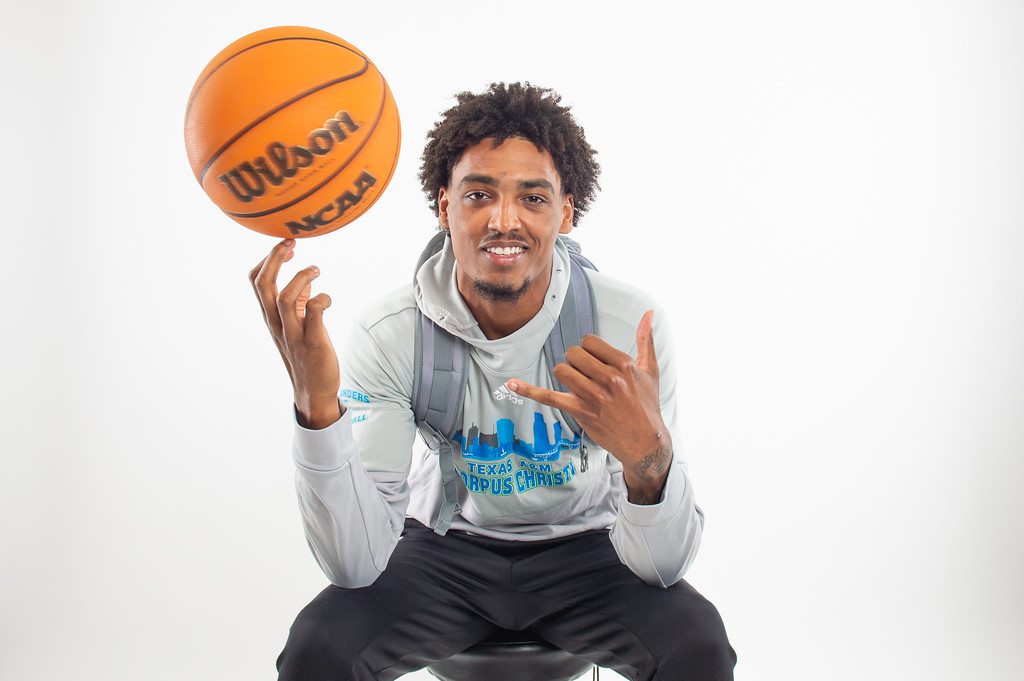 For as long as he can remember, Simeon Fryer dreamed of being a Division I student-athlete. Fryer was recruited to play for the TAMU-CC’s Men’s Basketball team in 2020. But before ever stepping foot on the court, he was sidelined by a rare disorder called Guillain-Barre Syndrome. This left Fryer wondering if he’d ever play basketball again.

After graduating from high school, Fryer attended the Community College of Beaver County with his eyes still set on transferring to a Division I athletic program. He was on track to accomplish this goal until the summer of 2018 when everything changed. Fryer noticed his body began to feel more tired than usual. Despite the growing weakness in his legs, he continued to believe nothing was seriously wrong.

“I went to the gym with my friend from the junior college, and I felt like I had worked out before going. I tried to dunk the ball, and I could barely do it. The next day, I could hardly stand up and get out of bed. It felt like I had bricks on my feet,” he shared. “For days, I just got weaker and weaker until one day at the mall, I tried to get on an escalator, and I couldn’t get my feet onto the steps. I took 10 more steps, and it became hard to breathe. That’s when I got nervous.”

Fryer called his mother, who told him to go straight to his doctor’s office. Upon his arrival, the doctor performed basic reflex tests and determined that his body was not reacting normally to stimuli, resulting in further testing. A spinal tap was performed and, based on the proteins in Fryer’s spinal fluid, a diagnosis of Guillain-Barre Syndrome (GBS) was given. One week after the diagnosis, Fryer couldn’t walk at all.

According to the Mayo Clinic, GBS is a rare disorder in which a body’s immune system attacks its nerves. The exact cause of GBS is unknown, and while most people recover completely from GBS, some severe cases can be fatal. Shortly after Fryer was diagnosed, he began to suffer from Bell’s Palsy on both sides of his face, thus severely affecting his ability to communicate. At the same time, Fryer began struggling to breathe, prompting doctors to caution him that being placed on a respirator might be the next step.

The physical toll GBS took on Fryer’s body was tremendous. During his 45-day stay in the hospital, he dropped from 185 pounds to 135 pounds. Along with his physical stature, Fryer’s basketball dreams also seemed to be fading into the distance. “At one point, I remember asking the doctors if I’d be able to play basketball that year, and they told me that they couldn’t put a timetable on my recovery because sometimes people don’t ever bounce back from GBS,” he said.

But, Fryer is a fighter and was not content with his fate being decided for him in such a way. Through a combination of intensive physical, speech and occupational therapy in which he essentially relearned almost every aspect of life, he began slowly working on regaining his prior fitness level. “Being an athlete, I’m used to intense workouts, but the recovery process was the hardest thing I ever had to do,” he said. “I had no strength, and I would break into a sweat just trying to stand up and take two steps.”

He was released from the hospital with braced crutches and a walker to continue his rehabilitation from home, where his mother helped push him to work harder. He returned to the Community College of Beaver County determined to reclaim his position on the court but sat on the bench most of the season while he regained his strength and coordination. Come 2020, a year and a half after his release from the hospital, Fryer was recruited to play for the Islanders Men’s Basketball.

Fast forward to today, Fryer is a redshirt senior and team captain of the Islanders Men’s Basketball team. He’s certainly found success on the court, being that he is the only student-athlete to start all 35 games last season, winning the Southland Conference Championship, and, for the first time in 15 years, advancing to the NCAA tournament.

“[Fryer] is the heart and soul of our team. He has been voted as a team captain in back-to-back years, which says a lot, given that he hardly knew any of his teammates before they got to campus,” shared Steve Lutz, head coach of TAMU-CC’s Islanders Men’s Basketball team. “When I learned about his story, it made sense knowing that his hardship gives him a different perspective on what is important in life, and he uses that to lead others. We are better for having [Fryer] on our team and at our university representing the Islander Nation.”

Though Fryer graduated this month with a Bachelor of Arts in university studies with a concentration in psychology, he will continue his education and pursue a post-baccalaureate degree in business beginning with the spring 2023 semester. With his determination and might, we are certain this season will be a winner for both Fryer and the team.