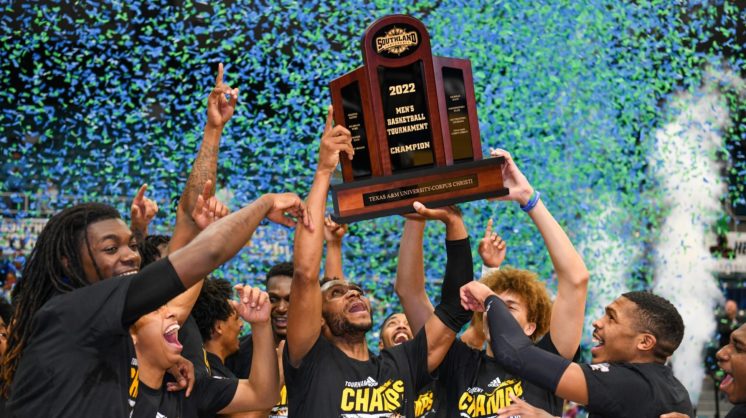 For the first time in 15 years, the Islander Men’s Basketball team will head to the First Four of the NCAA Men’s Basketball March Madness tournament today, Tuesday, March 15, in a nationally televised game on truTV at 5:40 pm (CT). The TAMU-CC Islanders will face Texas Southern University (TSU) in a match-up between a pair of No. 16 seeds at the University of Dayton Arena.

Under the leadership of first-year head coach Steve Lutz, the team landed its spot with a 73-65 win against Southeastern Louisiana on Saturday, making them the Southland Conference Tournament champions. This will be only the second NCAA Tournament appearance for the team, with the last one being during the 2006-2007 season.

Junior Terrion Murdix was named the Southland Conference Tournament MVP and awarded the All-Tournament Team, along with senior Simeon Fryer. In social media post to the team’s Instagram after the win, Murdix shared, “We just tried to buy into what coach told us all season and as you can see, it worked. We’re going to the tournament, and we’re about to be dancing.”

The winner of the TAMU-CC and TSU match-up will advance to play No. 1 Kansas at 8:57 pm Thursday, March 17, at Dickies Arena in Fort Worth, on truTV.

If you’re looking to catch the game with other local fans, there are a few spots around town hosting watch parties for Tuesday’s game.

The game will also be available to watch via:

All NCAA Tournament games can be watched online and the game(s) can be heard for free, live on the radio, on 1440 AM News Talk KEYS with Steven King on the call.