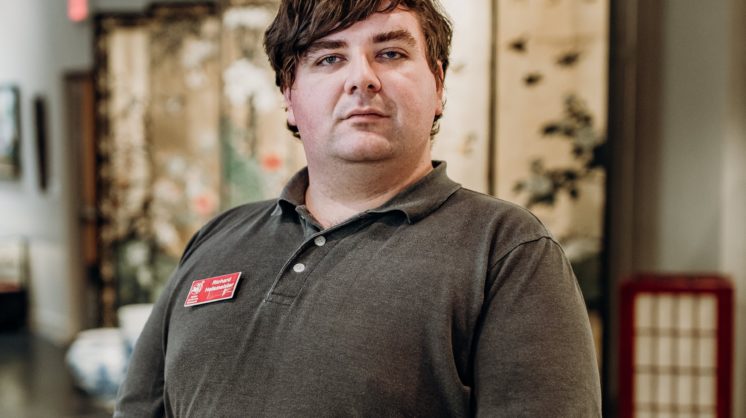 Kylie Cooper: First, tell me how you became so interested in history and culture.
Richard  Hafemeister: I have worked in education my whole career, basically since high school. But before now, it was always natural history and ecology. However, I was exposed to both history and culture my whole life, in part because my parents both got degrees in history in college – which meant I got some chuckles when I mentioned the new job.
Something that really helped me once I got here was going through the travel logs and notebooks of the museum’s founder, Billie Chandler. She kept fairly meticulous notes on her travels, mainly through Japan during the ’50s, ’60s, and ’70s, and in those files, you can see many of the stories that make the items in our collection so important, both culturally and otherwise.
What initially brought you to the Texas State Museum of Asian Cultures and Education Center?
Our previous board President hired me on not long after Hurricane Harvey. It was a great opportunity to learn a new skill set, and to be part of the museum’s rebuilding efforts after Harvey. Getting to see and learn about an entirely different field of education was kind of enticing.
Working in education of any kind was always my goal, and now getting to learn about places on the other side of the world while doing so is extremely enjoyable.
Why do you think the museum is so important to the community?
I think a lot of it is bringing the cultural aspects of our program to the public, so that they can experience the cultures of Asia. And part of our mission is preserving this history – both for people now, but especially given the pandemic, preserving it for future generations to enjoy.
The other thing that makes this museum important is the fact that there are only a handful (five, last time I looked) of other Asian Cultures Museums in the United States, so it isn’t easy to find this type of resource. What are your plans or goals for the museum in the future?

The biggest plans for the future right now include installing our Hakata Doll Hall in our Goldston wing later this year. Our next priority is the finishing touches on our Rotating Display Area schedule, which will include some of our 500-plus paintings in our collection. Yes, you heard that right: We have that many paintings, and not enough space to display them all at once.
So, one of our next priorities after that is fundraising for some building improvements to make better use of our space. Luckily, we have already had funding come through for the upstairs renovations last year, and those along with upgrades to our gift shop have already been done.
How has it been managing the museum amid a pandemic?
The pandemic has been the rampaging elephant in the room for almost everyone. As educators, it has taught us to change gears almost entirely. We had been moving to do as many hands-on activities as possible, but of course that’s the most dangerous thing to be doing right now.
So we have been moving ahead with plans to do a set of history classes based on the items in our collection, and increase the use of our rotating display area, which gives us a chance to bring in more people in a slow and socially-distanced setting, which will help us move forward faster when the time comes.
What do you think the museum brings to our local community and culture?
I think we cover a topic that most folks would not get to learn about in such a personal and up-close way without something like our museum here, which is why we have school tours come in from all across the region during peak times.
Our education team – who are mostly volunteers – really work to keep our programs as personal as possible on everything from our classes, where we teach the public how to make all kinds of origami themselves, to the videos and history classes. I think that really helps people, especially kids, feel attached to the things they learn.
Do you have a favorite piece or exhibit in the museum?
The various tools, swords, and blades, I think. There is such a great range of shapes, even within things that would be used the same way. Early toolmakers especially, but even as late as the 18th century, they didn’t know for sure what the best possible shape might be, so trial and error was needed for each new job.
Every time someone came to them with a new task that required a blade, from cutting down a new type of tree to hunting a new animal to someone coming up with a new armor, meant that new blades and tools had to be built. What is something most people might not know about the museum?

I think a lot of people would be surprised to hear how large and important a history component we have here. Almost everything here not only has a story, it has an important one that connects to the other stories throughout the Museum. The stories of why a certain art piece was made, what it meant then, what it means now. How it ended up here, and what happened to in between are often an adventure. These stories often weave together, much like how culture and history themselves do, into something more than the sum of their parts.
Contact:
1809 N Chaparral St, Corpus Christi, TX
texasasianculturesmuseum.org
Share