One Image, Many Stories - The Bend Magazine 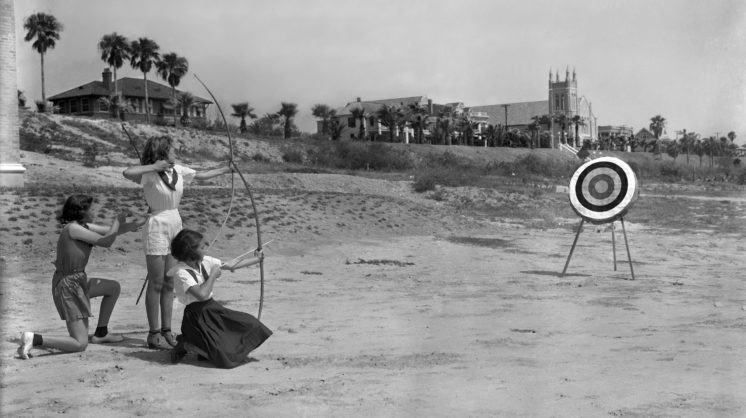 By: Jillian Becquet   Photo courtesy of the John Fred’k ‘Doc’ McGregor Collection at the Corpus Christi Museum of Science and History.

For historians and those who love to learn about local lore, an image such as this tells many stories. It goes beyond simply admiring the moment captured on film. When we try to date or place images like this, our detective skills are tested as we piece together clues not always noted in the photographer’s records.

Sometimes, if we’re lucky, someone says, “I know that girl!” and we can put a name to a face and a story to the photograph. Without that, we rely on examining details. Do you notice that two of the girls are wearing shorts and heeled shoes? What about the type of bows and arrows they’re using?

You can clearly see several homes in the background that are raised up on a bluff. From the white staircase and lighting, we can tell that it’s “the bluff,” what locals call the geographical feature located in downtown Corpus Christi.  Standing amongst the homes is the First Presbyterian Church, which was built at its current location in 1930.

Although we don’t know these girls’ names, the rest of the clues lead us to a very simple caption, featured above. For now, we keep learning and collecting clues, while treasuring these captured moments of our city’s past. And we continue to hope for the “I know her!” or “That’s me!” that will lead us to the whole story.