Looking Back: Move Along, Corpus Christi - The Bend Magazine 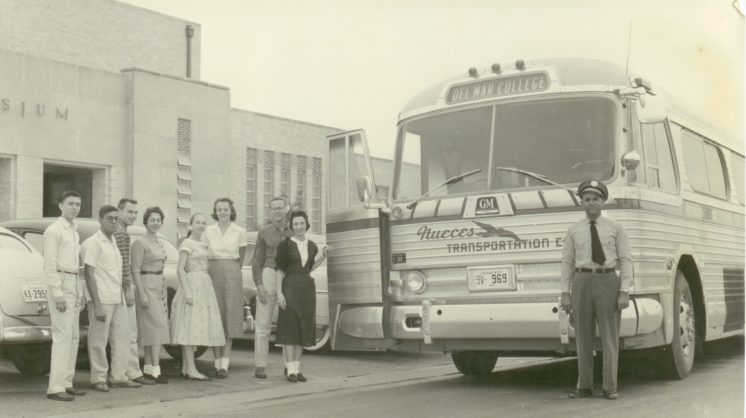 As cities grow, so does the need for a way to travel through them.  In the 1880s, residents caught a ride on a 10-seat mule-drawn coach to cross town, then steam-powered (then electric) streetcars ran through downtown. In 1925, residents looking to catch rides on public transportation began to look for buses. By 1931, the streetcars were gone and Central Power and Light company was advertising their new bus route, but soon they focused on power.

The new owners started the Nueces Transportation Company with just 13 buses. With restrictions on automobile use as part of the war effort, the number increased to 105 buses by 1945, providing 18.3 million rides annually. While car ownership rose after the war, the City of Corpus Christi knew many citizens depended on the buses to travel through town. They purchased the failing Nueces Transportation Company in 1966.  As the city grew, it was more challenging for the city to run the transit system. This led to the need for a dedicated group to oversee and improve it, so voters approved a sales tax increase to fund a new Regional Transit Authority.

Now called the Regional Transportation Authority, buses are still Corpus Christi’s main source of public transportation. Times have changed, with bus routes now available on an app and buses equipped with wheelchair ramps and bike racks. Check out bus routes that run near you—it’s easier to see what’s going on in town when you’re not behind a steering wheel.