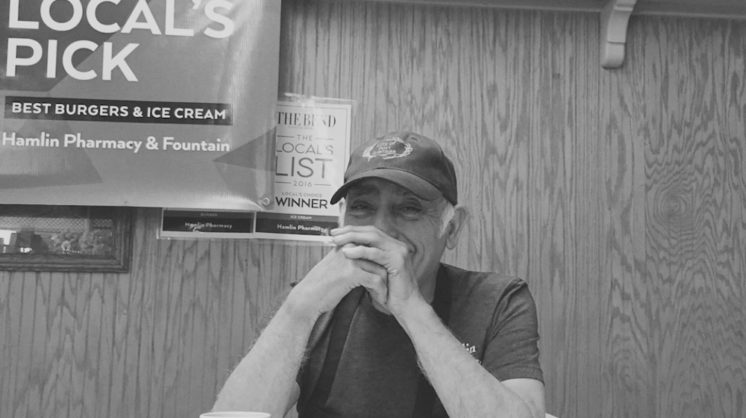 If you have any type of memory within the walls of Hamlin Fountain & Gifts, chances are they have something to do with Jesse Lerma. He might have flipped your burger and add extra cheese for you. He might have served you a cup of his famous chili. He might have just sat with you and listened to you talk about the bad day you’d been having. Whatever the memory looks like, Jesse is more than likely a part of it. He’s probably wearing his black apron and  has his City of Port Aransas hat, and he is definitely smiling from ear to ear. That’s just the kind of man Jesse was. Ready to make not just your experience at Hamlin great, but your day as well.

Last night, owner of Hamlin Fountain & Gifts Karen Nicholson took to Facebook to share the heartbreaking news of Jesse Lerma’s passing, due to complications with Covid-19. Jesse first walked through the doors of Hamlin in 1960, and for 60 years after that, he was family.

The Facebook post sharing the news soon began to flood with messages of condolences and shared memories throughout the years. Parents shared photos of their kids laughing with Jesse up at the counter, the feet dangling down from the barstool. Families spoke about their continued tradition of visiting Jesse generation after generation, having him serve each of them along the way. Former employees remembered how Jesse taught them to use the register or how to make his famous breakfasts. Hamlin regulars reminisced over Jesse memorizing their orders and times of day they’d visit, just to have a hot plate waiting for them upon their arrival.

That’s the thing about Jesse. His customers weren’t customers, they were his family.

So, heres to the greatest short order cook there ever was. We thank you for the decades of service. We thank you for your love and friendship. But even more than that, we thank you for making room for us all at the counter all these years. We’ll be eating chili out of a coffee cup today in your honor.