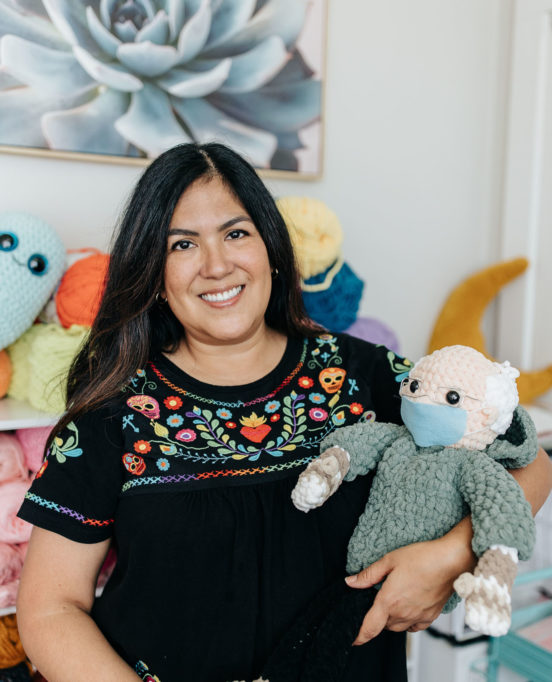 From gummy worms to The Golden Girls, Tobey Perales King has made a name for herself by crocheting various pop-culture inspired amigurumi. Perales King, a Corpus Christi native, mom and former hairstylist, started crocheting in 2014 and hasn’t stopped since.

“I didn’t have any hobbies,” she reminisces about the beginning of her creative journey when she became a stay-at-home mom, and soon began to crochet items as gifts. Once Perales King began to master the craft, she started making dolls for her daughter that resembled her own features. Eventually, Perales King started selling her creations to friends and family. With her crochet amigurumi gaining traction, she opened an Etsy shop in 2014. “Free time I get to myself is what I like to call ‘Tobey time,’” she said, which inspired the name of her business: Tobey Time Crochet.

Her first claim to fame came in 2016, when she made crochet dolls of all the presidential candidates, and they were featured in Buzzfeed. That led her to create a pattern for a sitting doll in March of 2020.

In the winter of 2021, everything changed: What was once a leisurely hobby became a literal overnight sensation when she crocheted a Bernie Sanders doll with mittens, modeled after the viral photo of the senator from the presidential inauguration.

“I posted the photo and went to bed. I had no idea what would happen the next day,” Perales King said. The following days accumulated thousands of likes on the post, as well as thousands of new followers on Instagram. She quickly threw together a pattern for the doll and listed it on Etsy for $5. She sold 30,000 copies of the pattern in one week, allowing her to raise over $40,000 for Meals on Wheels. Since then, one Google search yields hundreds of “Bernie Sanders with mittens” crocheted dolls.

Perales King has sparked a creative desire in people with her playful patterns and unique creations. One visit to her Instagram, Etsy or YouTube pages will have you wanting to buy one of her patterns to crochet a miniature Ruth Bader Ginsburg or an oversized gummy bear yourself.

Reflecting on her success, Perales King said, “This wouldn’t have been possible if I wasn’t home with the support and love of my hometown.” As for what the future holds: “I want to make more.” Perales King wants to get back to making and selling amigurumi locally. In the meantime, she is selling patterns, educating on YouTube and keeping her followers laughing on Instagram. Be on the lookout for her next crocheted creations at pop-up markets around town.

Looking for more local arts and culture? Check out A Celebration of Rockport-Fulton’s Art Colony, Up & Coming in the Coastal Bend: Dre Salaiz, or Local Artist Shelia Rogers Turns Trash into Treasure.