Centre (of the City) Theatre - The Bend Magazine 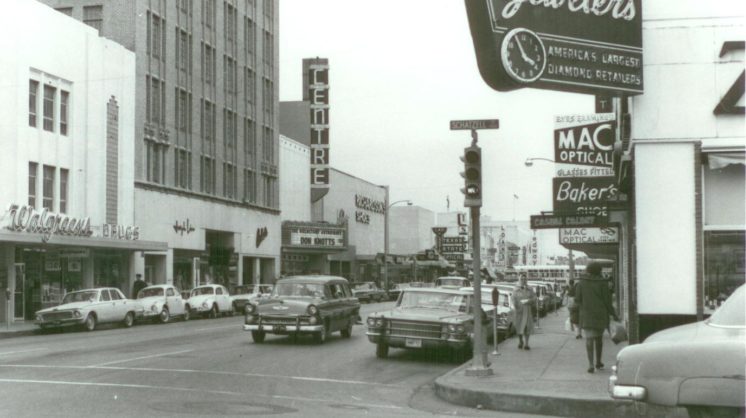 The people strolling the streets in this photo, taken circa 1967, lived in a Corpus Christi with less than 200,000 people. Theaters were an important part of the downtown landscape, where a shopper could buy new shoes and new glasses, fill their prescription, and watch a movie – all on the same block. Multiple theaters could be reached by walking from the Centre, but with each only showing a single film, people simply sought out the movie they wanted to see.

The Centre Theatre, so named by United Artists Theaters because it was located at the core of the downtown shopping district, was designed by famed cinema architect Jack Corgan. Construction of the luxurious theater finished around the time of the attack on Pearl Harbor. The Centre opened February 10, 1942, with its sign proclaiming “Remember Pearl Harbor Buy Defense Bonds & Stamps …” It offered a lavish interruption from everyday life for its visitors for decades before closing in 1988, when multi-screen theaters had become more commonplace and shopping moved toward the south side.

The Centre lived on as a live performance venue into the early 2000s before its doors closed for the last time. Now, we must look to theaters like the Ritz to return the magic of film and live performance to downtown’s streets.