Angels Among Us - The Bend Magazine 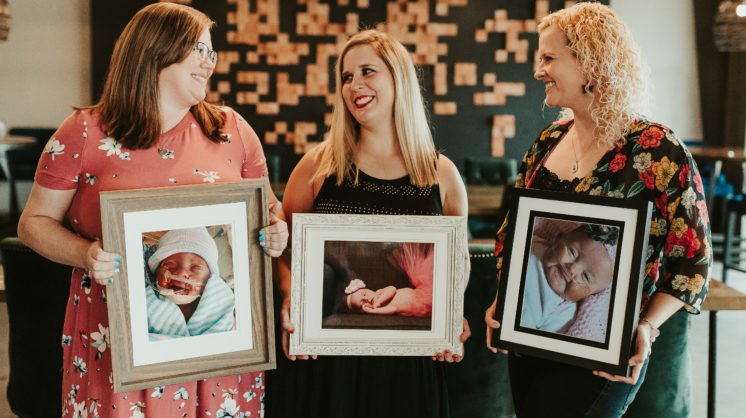 Losing a child is not something parenting books or magazines prepare mothers for. It happens suddenly, and you’re left wondering where you went wrong, or if there was anything you could have done differently. Three young mothers each experienced the tragic loss of a child, but chose to rise above the grief and carry their babies’ memories through random acts of kindness they call “angel acts.”
In 2015, after giving birth to micro preemies, Linzy Adams and Andrea Barrett were brought together by NICU nurses as a form of support for one another. After Andrea’s son, Eli, passed away, she poured her energy into supporting Linzy and her daughter, Alena. After Alena’s passing, Linzy and Andrea decided they both wanted to be there for other mothers going through the same experience. They read about a BBQ benefit held for an infant who had recently passed away – Jaclyn Kelley’s daughter, Avery. Andrea and Linzy immediately felt a connection to Jaclyn, and soon after, the three women were an unstoppable healing force.
The Angel Acts Project began in the midst of bonding over the grief of losing a child. “There were bad days where we didn’t want to get out of bed,” says Adams, “but we could either let the grief continue to break us, or we could come together to heal.”
Although the pain won’t disappear, holding on to the love, instead of the loss, can channel the pain into greater things. Kindness is a gift everyone can afford to give. Kelley adds, “we started doing little things like holding open doors, putting away grocery carts, and giving someone a random compliment.” They noticed an overwhelming sense of happiness resulting from these acts, and decided to continue.
In April 2016, they had their first Angel Acts Day, which consisted of a full day of angel acts of kindness. “The small acts turned into bigger acts,” recalls Barrett of the time they took bouquets of flowers to the graves of babies. “We left a note to let the parents know we were thinking of them and they weren’t alone.”

A heartfelt, heaven-sent birthday wish from Eli is among the most memorable. The girls went to H-E-B and took care of a random, unpaid balance on a child’s birthday cake with a note bearing Eli’s blessings. They also took time to visit the nurses from Driscoll Children’s Hospital and bring them pizza and sweets.

Kelley, Adams, and Barrett agree that having the support system they’ve built is life-changing and has helped them channel their emotions into happier moments. They’re starting small, but they’re focused on helping other mothers through this terrible loss. Although they aren’t your average grief group, they do talk, share, and cry, but they keep their hearts and minds busy, which is healing.
As short as their time was here on Earth, Eli, Alena, and Avery touched the lives of many people and Andrea, Linzy, and Jaclyn are positive their babies are looking down from heaven and are proud of their accomplishments.