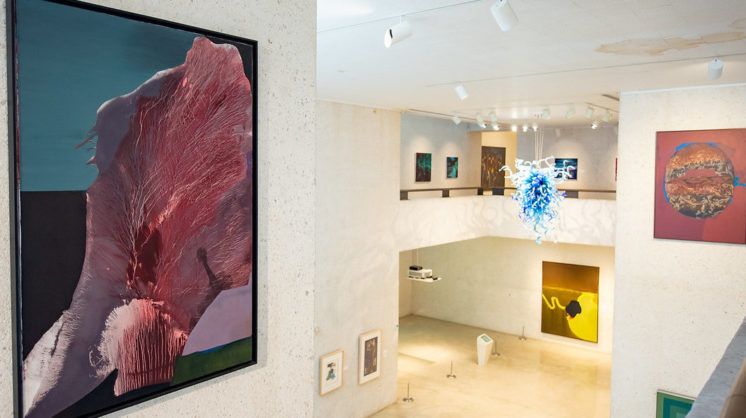 Museum-goers: in case you haven’t been, welcome to the future.

The Art Museum of South Texas (AMST) had two of its majorbrexhibitions receive the 2018 Mountain-Plains Museums Association ExhibitbrTechnology Award earlier this month. The prestigious awards, both of which arebrfirst place, are based on AMST’s use of technology to curate the exhibitionbrexperience.

Dorothy Hood’s 1918-2000 collection “The Color of Being / ElbrColor de Ser” is her lifetime collection in a guided display incorporatingbrinteractive technology, like the DIY virtual painting experience. Here,brvisitors create digital art with the same techniques Dorothy used. The piecesbrhang at the AMST until January 8th, but some of the interactive stations havebralready moved on to other cities. The “DIGITAL DARKROOM”brfrom the Annenberg Space for Photography almost literally puts a tour guide inbryour pocket with the augmented reality app: it links to the exhibit itself ofbr17 different artists from around the world, and you can learn about their workbrby just pointing your phone at it. AMST plans to work more with augmentedbrreality technology in the future, even with the museum’s permanent collectionsbras was done with this one.

“We are thrilled ourbrpeers again recognized the Art Museum of South Texas with an award for ourbrtechnology efforts associated with exhibitions,” comments AMST Director, JoebrSchenk. “The ‘First Place for Exhibit Technology’ award we won for the ‘ThebrColor of Being/El Color del Ser: DOROTHY HOOD (1918-2000)’ exhibitionbrinteractive technology and the ‘DIGITAL DARKROOM’ from the Annenberg Space forbrPhotography augmented reality mobile application is quite significant in ourbrten-state region. I am proud of our museum staff for their accomplishments.” September 14th during the Mountain-Plains Museums Association Conference. ThebrAMST’s use of media and technology for interpretive, interactive installationsbrupheld the highest standards of excellence.

brbrAlthough we trust the critics, both collectionsbrare ones you should see for yourself before they move. The Art Museum of SouthbrTexas is open to the public Tuesday through Saturday from 10 a.m. to 5 p.m.,brSunday 1-5 p.m., and closed on Monday. For more information, call 361.825.3513bror visit artmuseumofsouthtexas.org.