A Thousand Feet From Shore - The Bend Magazine 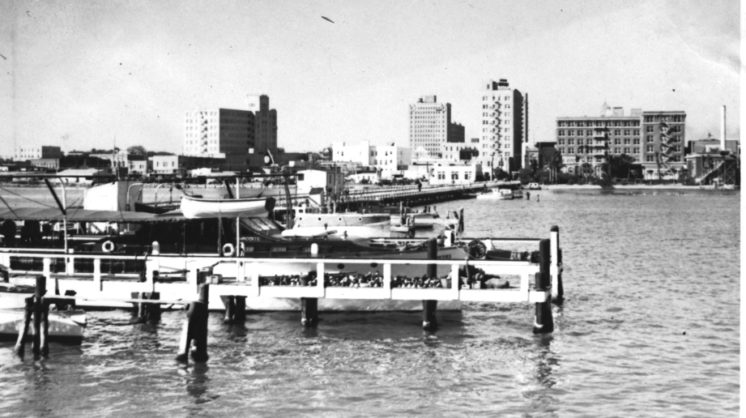 Before there was a seawall to stroll, you needed to be on Water Street to get the best view of the Corpus Christi Bay. It ran along the water, and businesses thrived with locals and visitors looking to get the most scenic view for their business meetings, meals, and hotel stays. These attractions went through two hurricanes in 1916 and 1919, so when the 1920s arrived, the city knew the area needed a major attraction to get business going again.

Pleasure Pier’s 1,000-foot structure had a T-head for landing boats and one of the most popular restaurants in the area: Pier Café, located at the left side of the pier in this image. The Café’s advertisement for the opening of a new 50-table building in 1932 promised the view would provide “a delightfully cool atmosphere” for diners. The Nueces Hotel – with its zig-zagging fire escapes visible at the right side of the image – enjoyed the best views of the pier, and its guests regularly enjoyed its charter boats, dining, and fishing. It wasn’t unusual for locals working downtown to stroll the pier on their lunch breaks, or after a meeting at the Nueces Hotel.

Pleasure Pier went on to survive future storms, and lasted until it was dismantled for seawall construction in the late 1930s, which gave us the bayfront elevation we know and love today.

Photo Caption: The entire Pleasure Pier and the Corpus Christi skyline are visible from the foot of the pier on Dec. 6, 1938.

The entire Pleasure Pier and the Corpus Christi skyline are visible from the foot of the pier on Dec. 6, 1938.