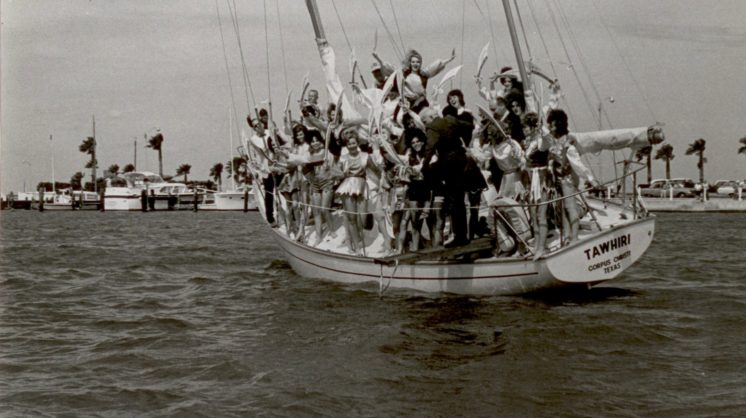 Each year, groups of citizens dressed as pirates provide a ceremonial beginning to the Buccaneer Days festival, courtesy of the Mayor (or their designee), who is escorted aboard their ship.  The Mayor then ends up in Corpus Christi Bay after being shoved, jumping, doing a front flip or a cannonball … methods have varied over the years. During the last 40 years, only 12 Corpus Christians, including a Police Chief, Council Members, and Mayors Pro Tem, have been privileged enough to be ordered to the plank.  The dunking of the mayor symbolizes the pirates and pirate queens taking control of the city for the duration of the festival.

In Mayor Furman’s first dunking, he rode aboard the Tawhiri before he was ordered into the Bay. Dr. Furman was a recognizable Corpus Christi resident even before he became Mayor – he was the city’s first Eagle Scout, acted as Clara Driscoll’s personal physician, and worked tirelessly toward the creation and stability of Driscoll Children’s Hospital after her death. He famously said, “We have passed from a small town. We now must think in larger terms,” before leaving office after one term and continuing to practice medicine.

Mayor McComb’s first two jumps came in 1991-92 as Mayor Mary Rhodes’ stand-in, and he’s completed two as Mayor. This year, he’ll call on a stand-in of his own, and Councilman Roland Barrera will take his first plunge as pirates seize control of the city for the 83rd Buc Days Festival. Arrr.