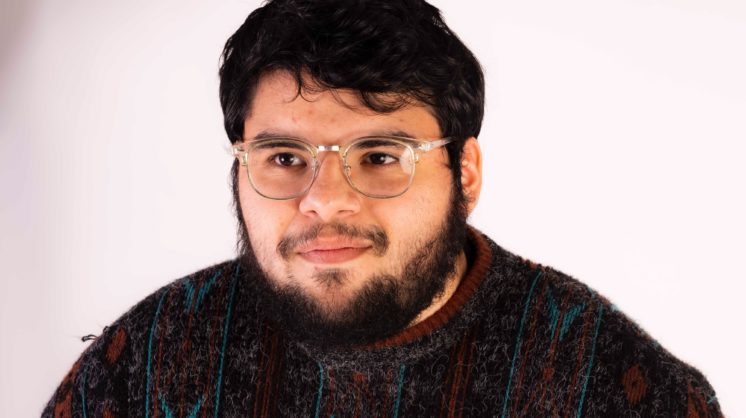 We’re back with the March edition of Up and Coming Coastal Bend — a series dedicated to showcasing the creative talents of our younger generation. Take a look at this month’s featured young adult.

In the foreground of Corpus Christi’s creative renaissance lies Cris Olvera, a filmmaker and storyteller who’s surrounded himself with innovative forces. From musicians and creatives at PRODUCEⓇ to designers and writers working out of Lucy’s Snackbar, Olvera has found himself nestled amongst a web of visionaries that foster creative exploration.

Oftentimes found behind the scenes, Olvera’s passion for telling both visual and literal stories started at a very young age. As a kid, he was drawn to television, movies and music videos. “Film was an escape for me that soon turned into a framework for maturing, a guide between emotions and human experiences.” As time went on, and harsh realities of life set in, Olvera found himself immersed in the art of storytelling through involvement at the Harbor Playhouse and the support of his wonderful grandparents.

Olvera’s passion continued through high school and into adulthood. His grandiose spirit and amiable personality naturally make him a magnetic creative force in town. These connections are exactly what his work is about: love.

“All of my creative ‘ventures’ are a deeper explanation of what my friends and family are like to me and my heart.” He finds joy in “creating a time capsule” of creative works surrounding his loved ones; telling their stories and celebrating their being. “With my love in the forefront, I mix the genres of film, music and philosophy that I subscribe to. Using film as a tool to tell stories that people love, in a way they’ve never seen before,” Olvera says.

With Corpus Christi often being both the subject and audience of his work, Olvera is hopeful that work like his will inspire others and continue shining a light on small town creatives with a desire to engage with their community and uplift their voices. He aims to continue making work that people can see themselves in, whether it be through the characters, the city or the vision. “Whether it has to do with their joy or their pain, I hope it does what my work does for me, which is to heal.”

With his hand in a variety of projects underway, Olvera’s radiance and magnetism are sure to continue illuminating Corpus Christi while bringing people together. Current projects include Yikes, a web series he both writes and directs which features the follies of roommates and friends, Ryan and Ricky. As this project nears completion, Olvera is ecstatic to continue exploring new passion projects with his team.

Olvera is also producing a feature-length coming-of-age film titled “Friday Night Delight” with producers Daniel Egnal, Devon Welch, and Scott Thurman and a short film titled “The Girl with Too Many Eyes” in collaboration with Ratwood Productions and the TAMUCC Media Department.

Whether you know Olvera personally or are just discovering his brilliance, one thing is certain: his work and heart will certainly continue to bring joy to both friends and strangers alike.