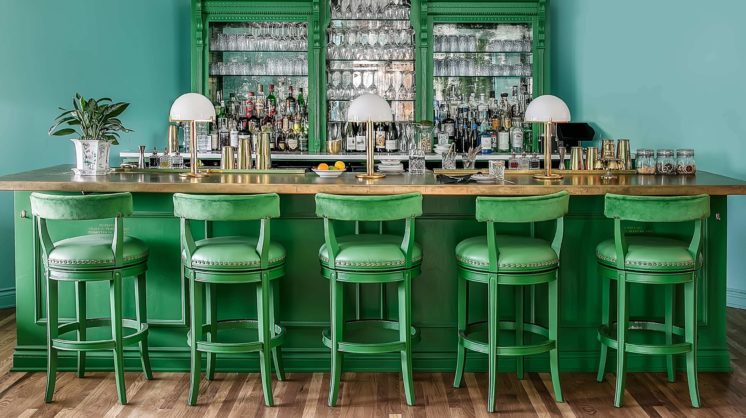 A childhood rule—one of the great rules of life—is that you can’t pick your own nickname. Some cities seem to think themselves immune from it, but Windy City, Big Apple, Big Easy, Sin City, Emerald City, and so many others are examples of why the rule is solid. Oklahoma City is currently workshopping two options: The Big Friendly and The Modern Frontier. The former evokes Disney-esque dog stories, and the latter cowboys in North Face. The truth is, OKC deserves better, as it’s currently one of the hottest destinations in the country.

In November 2021, Alton Brown—chef, author, Food Network star, that Alton Brown—posted on social media that Bar Arbolada, a new-ish California-esque hot spot near downtown, has “the best double cheeseburger in America.” Seemingly every time someone famous goes to Oklahoma City, they find some new thing locals take for granted and treat it like a new installment in the Indiana Jones franchise. For Jay-Z it was also a burger; for Bon Appetit, it was the Best New Restaurant in America. Clearly, Oklahoma City has great food. More than a food city, though, it’s a place of genuine hospitality, grace that comes from old wounds barely healed, and a refreshing plainspokenness based on respect for doing and not just talking. The Oklahoma City National Memorial is where its story starts now; it used to be a Land Run, but that idea is now in flux, as Native Americans are reasserting—with the help of federal courts—old land rights, and contributing billions of dollars to the state’s entertainment options, primarily via casinos, many of which draw Texans by the millions each year.

It’s a time for rewriting some older narratives, though. Oklahoma City is home to a thriving Asian District with an abundance of Vietnamese, Chinese, Laotian, and Korean food. A few miles south of that district, two bustling LatinX districts are home to the city’s best taquerias, mercados, and food trucks. At last count, the city contained restaurants and bars representing more than 30 nationalities. The old conception of Oklahoma City as a place of pump jacks, cowboys, steak, and Sooner football—though all those things still exist—is being displaced by a very modern, easily accessible, surprisingly diverse, fun, and fascinating city.

HOW TO DO OKLAHOMA CITY

The Bradford House is OKC’s newest boutique hotel, both an old residence and new motel-style addition just two miles north of downtown and a few blocks north of the Asian District. It’s beautiful, comfortable, and homey, while also managing to be elegant and modern. The kitchen features a brilliant chef in Caleb Stangroom, and one of the state’s best bakers in Trisha O’Donoghue. Where to Eat & Drink

If you had one day in the city, you would be hard-pressed to improve on brunch at Frida Southwest, cocktails and snacks at Bar Arbolada, and dinner at Grey Sweater. The former is the city’s current hottest restaurant, guided by the incredibly gifted Executive Chef Quinn Carroll, with desserts by pastry genius Chef Rachel Porter. It’s hard to overstate how good this food is, including seafood tamales, short rib empanadas, hearts of palm “calamari,” and Mexican hot chocolate cheesecake. That it also has an amazing bar with an eclectic, modern wine list and creative cocktails is an almost unbelievable abundance of riches.

Palo Santo is another of the California-cool-vibe bars like Arbolada. Its owners, Brian and Bailey Butler, are hospitality professionals from L.A. Brian worked for rockstar chef Roy Choi, so the food is spectacular—especially as bar food goes—and Bailey is a brilliant, gifted bartender, whose cocktails range from very approachable (habanero Pisco punch) to very challenging (too many Mezcal cocktails to list). Grey Sweater is OKC’s elegant, tasting menu restaurant with foods imported from all over the world. Chef Andrew Black and his team plate food that has magazine-photo quality visual appeal while also being delicious—a pleasant surprise in the Instagram-driven food scene. It’s pricey, so if you’re not looking to spend a couple hundred per person, head for Patrono, with some of the city’s best Italian, or The Hamilton, with Okie-centric, upscale casual dining and a cocktail program to rival any in the state.

Where to Visit and Play

The Boathouse District has family-friendly fun—ziplines, kayaking, a surfing simulator, white water rapids—and an Olympic training facility along the Oklahoma River. Plus, the burger at the Big Water Grill is among the city’s best. Scissortail Park is the newest addition to downtown, and it has and is surrounded by tons of options: the Myriad Botanical Gardens, Spark Burgers and Custard, splash pads, Social Capital’s massive beer selection, running and biking trails, and the Paycom Arena if you’re trying to catch a Thunder game.

OKC Memorial and Museum. No, it’s not technically fun, but it’s important—both to the locals, and to America’s modern history. It’s designed to be viewed day and night, and it’s stunning at every hour.

The First Americans Museum opened in October 2021, completing a decades-long vision to gather the stories and artifacts of 39 Native nations in one stunning space. With entire sections for children, interactive exhibits, a restaurant with Native American specialties, the voices of Native narrators, and a massive collection of artifacts, a family can spend an entire day exploring the site.

The OKC Museum of Art and Oklahoma Contemporary Art Center are two very different art experiences, but both are bound together by a commitment to modern art. The OKCMOA’s permanent collection includes a massive Dale Chihuly installation that is whimsical, colorful, and beautiful.