The Will to Thrive - The Bend Magazine 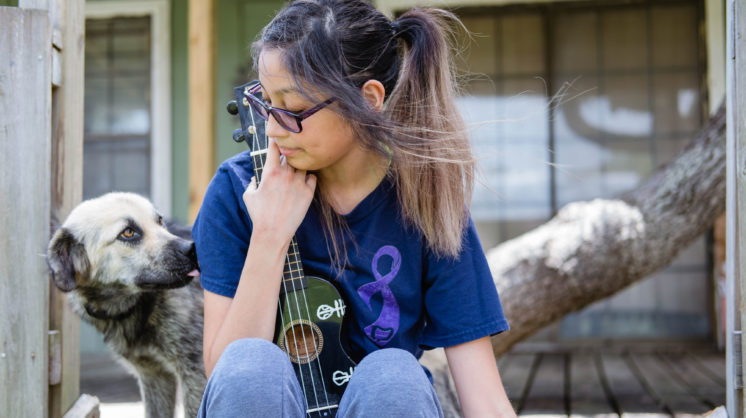 Catarina Hassan is a 10th-grade student with an undeniable zest for life. She excels in school, enjoys teaching herself new skills, and possesses wisdom beyond her years. Catarina also has Crohn’s, a life-altering chronic autoimmune disease, but she doesn’t let that or anything else hold her back.

Before being diagnosed, Catarina played basketball and baseball, keeping right up there with the boys. However, she began falling ill more frequently and was unable to continue with her active lifestyle. Although Catarina says Crohn’s has changed her a lot, the disorder has not deterred her positive outlook and will to learn.

Catarina loves to teach herself new things. She’s learned how to play the violin, piano, and guitar. She’s also mastered crocheting and crafts little stuffed animals in her spare time. The continuous movement of her hands while crocheting or playing music is both therapeutic and cathartic.

Her passion for the arts doesn’t stop with music and handicrafts. Drawing is another one of Catarina’s talents. Over the past three years, she has participated in the Art Museum of South Texas’ Visionarios Arts Contest. The contest encourages young people to participate in art and recognizes young artists for their efforts. One of those years, she was named the winner of the competition!

Catarina has achieved so much in spite of the limitations caused by Crohn’s. Her biggest motivator is a love for animals. She says she loves animals because “they are always loyal and loving, they don’t judge you, and they never get mad at you.” Catarina holds these values close to her heart and treats animals, friends, and family with the same respect.

Because of her story, Catarina urges others not to take things for granted.  “Don’t let things get you down,” she says. “Even when things feel uncomfortable, make yourself do things you’re not used to in order to get out of your comfort zone.” That is pretty incredible advice from a young lady. Catarina’s mother, Melissa, confirms that her daughter will always be a wise soul despite all of the challenges she endures.