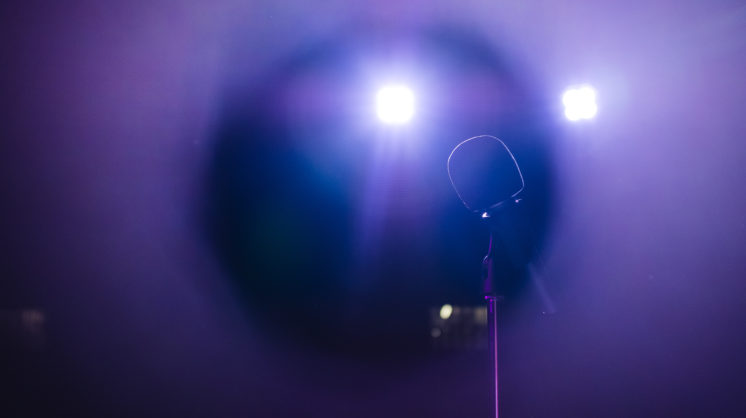 The art form of storytelling is sacred. Since the beginning of humanity, we have gathered to share legends, cautionary parables, histories and other tales. This ongoing legacy informs much of human civilization – and is even why this very magazine is in existence. There is something about sharing among ourselves in this way that allows us a sense of connection in an often unfeeling world.

Verbal Ink is changing Corpus Christi, one story at a time. Heidi Hovda manages her own company, Manifest Creative Works, which is built on a concept of using community resources to help and teach people how to build their events. It’s creating something special in our city by hosting its signature donation-based event, Verbal Ink.

“I always say I’d rather die a hundredaire and change my community than die a millionaire, and have no soul, and live in a bland community,” Hovda says firmly.

Three years ago, when Hovda quit her job and started her company, she used Verbal Ink as a soft launch. Hovda shared the synchronicity associated with the great support from her friends while organizing this event.

“There’s this book I read in college called The Artist’s Way. There’s a phrase in there called synchronicity. If you throw yourself out there, that will catch you. [Verbal Ink] was synchronicity; I threw myself out there, and Sara Morgan at the Art Museum caught me. I had space and an idea, and now it comes down to executing an event every month,” Hovda says excitedly.

The storytelling event was born out of admiration of a scene in the HBO series “Girls,” in which the main character shares a tale with storytelling group The Moth. Hovda thought it was the coolest thing in the world. “Through those stories, we become better people. There is something for everyone to learn,” she says.

The Moth is a long-standing tradition, but what’s different about Verbal Ink is the intimate work Hovda does with the storytellers. “It’s super unique. It brings a very niche audience and performances that don’t require anything extravagant.”

Hovda will avidly tell you that storytelling is what people have done throughout history.

“They sit around a campfire and talk about their day or tell their story and trade their history and pass it on. That’s why I think there is something unique that happens; there is something irreplaceable whenever a storyteller connects with a live audience.”

The Black Box Theater in which Verbal Ink takes place is very much a listening room. Not only following audience etiquette of turning off your cell phone, but being respectful and engaged with the performer.

“The space is so small, it’s essential that the audience respects the storyteller and laughs when the storyteller says something funny and cries when they say something sad, or clap or gasp,” says Hovda. “Give them that immediate feedback, because that’s what a storyteller needs.”

“We have a vibrant, thriving creative community, and I’m always amazed at how everyone, including myself, continues to persevere despite roadblocks. Verbal Ink is another way people can express themselves creatively, or is there for the person that likes to hear other people’s stories.”

Verbal Ink takes place during ArtWalk on the first Friday of every month at the Art Museum of South Texas, which offers $1 admission to the museum. Verbal Ink focuses on a different theme each month, and stories must be submitted by the 15th of each month.

The event series is bringing a voice and a platform to people from all walks of life to share their story and have it be heard. Seems like a rather simple notion, but when a stage is given to someone who has something to say, magic happens.