The Many Lives of One Corner - The Bend Magazine 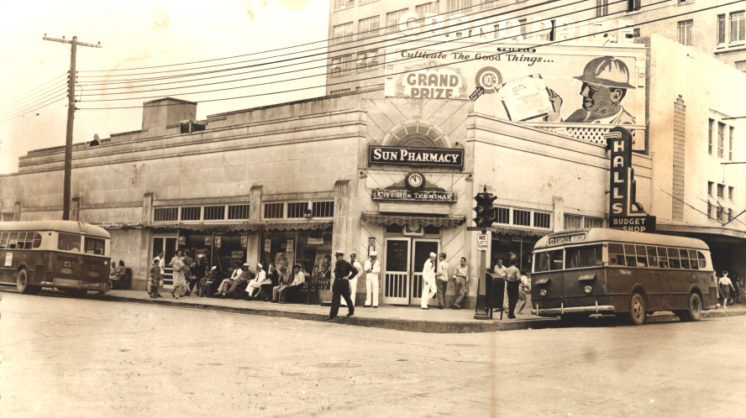 For nearly as long as Corpus Christi has been a city, the southeast corner of Schatzell and Chaparral – where Dokyo Dauntaun stands today – has been home to commercial businesses. In the 1850s, a two-story wooden building served as the business headquarters for wool and hide dealer William Headen, who was the business partner of William R. Grace, a future mayor of New York City. The building was originally built in New York, then was dismantled and shipped to Corpus Christi in approximately 1859.

After Headen, the building was owned by J.W. Westervelt, a ship chandler. Growing up in Corpus Christi, William S. Rankin aspired to own the Grace-Headen building someday. He did come to purchase it, and also owned several grocery stores throughout downtown. He sold to Hugh Sutherland, who used it for a variety of businesses, including law offices, a grocery, and a café.

In the 1930s, the old wooden building was torn down and a new building, housing the Modern Pharmacy and Hall’s Credit Clothiers, was built. By the 1940s, the Sun Pharmacy moved in, along with the city bus terminal.

Many Corpus Christi residents remember this as the longtime site of Lester’s Jewelry, with Vo-Craft shoes next door. Returning to its earlier days as a grocery, it then became home to a Maverick Market convenience store. In recent years, it has hosted a handful of restaurants, with no signs of slowing down as an important part of Corpus Christi’s downtown. It’s just looked a little different to each generation.