The Healing Power of Kundalini Yoga - The Bend Magazine 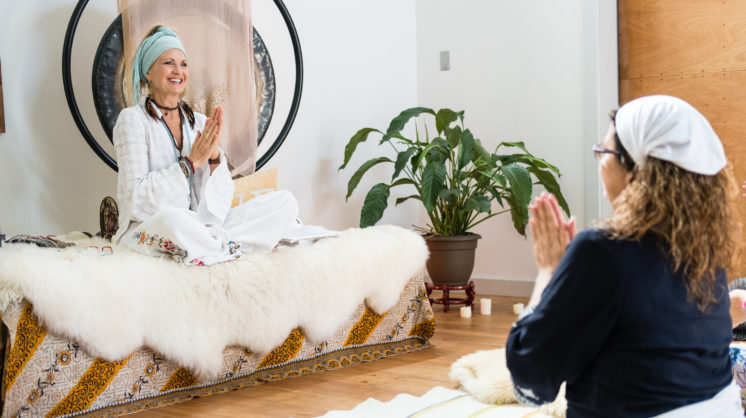 Dr. Lynn Crocker and her husband, Dr. Vance Crocker, are both healers in the traditional sense of Western medicine. Lynn Crocker is the Chief Hospitalist at Christus Spohn Shoreline and Spohn South hospitals, where she works every day with patients who are critically ill or who may be recovering from other serious illnesses or surgery. Vance Crocker is a Corpus Christi dentist who often treats patients who stress out about coming to the dentist.

The two also practice the art of healing in a more spiritual and holistic way. They do this by offering a practice called Kundalini Yoga in their donation-based space called, Kosa Daya Kundalini Yoga Studio. The name means, “The Vessel of Compassion” or more directly, “The Body of the Divine.” The Crockers are the first to bring the practice to Corpus Christi in a community setting. “Kundalini Yoga is very much a technology that encompasses all eight limbs of yoga. That includes what we know in Hatha Yoga as postures, or moving the body, but it also includes pranyam, which is breath,” Lynn Crocker said. Kundalini Yoga teaches a variety of breathing techniques that have specific purposes, such as releasing tension, calming the nervous system, improving cognition, and producing quick energy. Kundalini also instructs practitioners about the ten bodies which make up the human body. These include the physical body, three mental bodies, and six energy bodies. Additionally, this style of yoga emphasizes the benefits of eating the proper foods and chanting.

In a recent Saturday morning class, which consisted mainly of Kundalini Yoga teachers, the response was enthusiastic. Most who attended were physicians, nurses, and others who work directly with patients. One student had recently undergone a double lung transplant and had seen the healing benefits first hand. A nursing student in the group had used the breathing techniques to help her patients. “So, it’s a very complete technology that’s in every set we do. It’s very transformational. It’s not for everybody, but it’s been very special for me, as you can tell from the stories that people shared,” said Lynn Crocker, who is a doctor of osteopathic medicine and is board certified in internal medicine.

Lynn Crocker calls the Kundalini evidence-based and has seen her patients, including one former NFL football player, decrease the amount of medications taken for chronic pain while engaging in the Kundalini Yoga practice. “I offered some lavender essential oil to him, and he was able to cut down on the amount of narcotic pain medication he needed. He also is a minister to the homeless, who said he needed to share it with people,” she said. Vance Crocker explained the science behind yoga. “There have been cerebral blood flow studies about this particular practice. And you can actually see the infusion of blood flow into the area that has atrophied. And it actually nourishes it and actually starts morphing. And so, there are structures that are visible that ultimately get plumped out. It actually works,” he said. The yoga classes have been moved from their previous location at the couple’s home on Santa Fe Street and are now being held at several new host locations, including the Coastal Bend Wellness Foundation. Follow the Kosa Daya Kundalini Yoga Studio on Facebook for more information on classes at https://www.facebook.com/KosaDaya/
For more information about the studio or about Kundalini Yoga, contact Dr. Lynn Crocker at 602-413-8105 or by email at arjandeva@icloud.com
Share