The Ghost Story of Christmas - The Bend Magazine 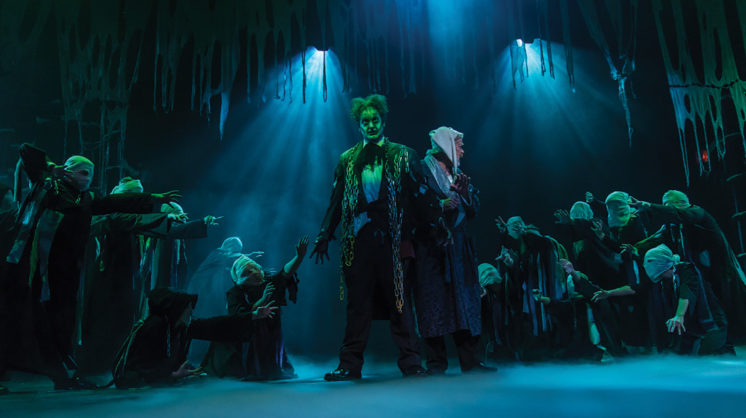 As children anxiously await the coming of Christmas, the presents, the lights, and the carols, a scrooge will be present—Ebenezer Scrooge, that is!

In its eighth year, A Christmas Carol, the popular classic by Charles Dickens, is brought to life by Corpus Christi’s very own Harbor Playhouse, as an eight-year long tradition. Local actors, along with the directors, combine their talents to tell the tale of Ebenezer Scrooge as he experiences a series of strange events after being warned to change his ways by his former business partner, Jacob Marley. The superb musical trails Scrooge on Christmas Eve, as he is visited by the ghosts of Christmas Past, Present, and Future—ultimately resulting in his discovery of the true meaning of Christmas.

Open auditions are held each year, swarmed with hopefuls yearning for a spot in the highly-anticipated Christmas production. Casting for a musical is a much more extensive process than a regular play. Auditions include reading, singing, and dancing numbers. However, vocal, musical, and dancing talent is not sufficient to earn a spot on the cast. The cast members must then perform various scenes together to ensure on stage chemistry. If the audition process itself is not enough to render you breathless, prospective actors must be willing to commit twelve weeks of their time to the production, both for rehearsals and performances.

No stage production would be complete without visuals to epitomize the true meaning of the storyline. Each scene is complete with life-sized, historically accurate props, inviting the audience to become a part of the play’s events.  Each prop is built, painted, and decorated in the wood shop housed at the Harbor Playhouse. Josh Goldson, the Technical Director, along with his team, is the mastermind behind the lighting and lifelike movement of the scenery. If you’ve seen photos of past productions, you’ve probably noticed the epic ending scene, where all cast members gather together under a cascade of snow, to which Goldson gleefully states, “we are famous for making it snow in Texas!”

Karen Rauch, and her team, join in on the breathtaking scenery of the musical with costumes. In the costume library, you can find Rauch, sorting through the ocean of costumes and supplies; the vast arsenal of accouterments used bring the era alive through their uncanny resemblance to the time period. With so many costume changes throughout each scene, Rauch and her team are always prepared for any last-minute alterations.

Every member of the team works in tandem to provide the audience with an incredible performance. As a small community theatre, everyone bonds together as a family, contributing to the success of the annual production, making the Harbor Playhouse one of  the best places to view any theatrical production.