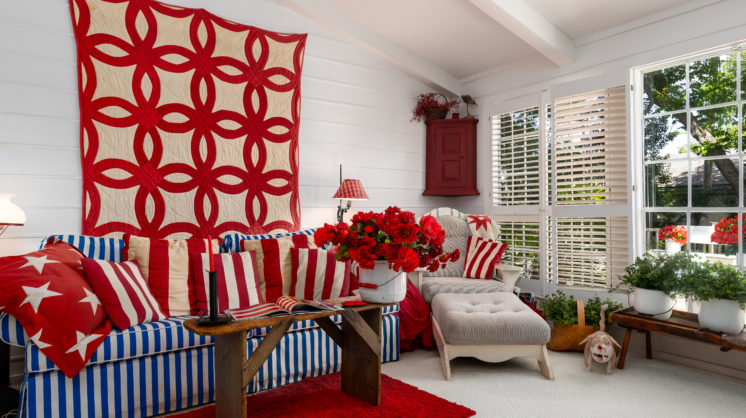 Just steps away from the Corpus Christi Bay is a home straight from a storybook. The Federal Colonial-style home owned by Donna and Larry Frederick is rich with character and charm, and the palette of red, white and blue makes this home distinctive — and definitely American.

When the Fredericks first moved to Corpus, Donna struggled to find a home to fit her style — but when she stumbled upon the traditional home, she knew it was the one. “It was the kind of house I had always wanted to live in. It was my dream home,” she said. The nearly 100-year-old home hasn’t changed much over the last century. Maintaining its idyllic charm and rich history, Donna has taken inspiration from its character.

The home is filled to the brim with early American antiques, primitive pieces and red, white and blue accents. In the dining room, pine cupboards are styled with artifacts one would find in Colonial Williamsburg, like antique pottery and Civil War pewter pieces, while Windsor chairs, which are an early American classic, frame the oval dining table. The charming kitchen with its blue tile, white cabinets and red accents flows into the adjacent sunroom, which features fundamental Americana motifs like stars and stripes.

The Fredericks’ American pride, which is apparent throughout their home, stems from their family history. Donna and Larry’s two sons, Joe Bob and Jake, and Donna’s father were all Marines. “My dad was a veteran and Marine,” says Donna, “and then my two boys became Marines. I always say my dad was the first Marine I ever loved.”

The den houses one of Donna’s most beloved possessions: a small plaque featuring two stars. The plaque, given to mothers during WWII, sat in her grandmother’s window until her two sons returned home from war.

Another markedly American detail featured throughout the home is Donna’s extensive collection of quilts. “Twenty-five years ago, I started collecting antique quilts because my mother, grandmother and great-grandmother were wonderful quilters,” she said. “I put an ad in the paper looking for antique quilts, and for three years, I got calls nearly every day.” 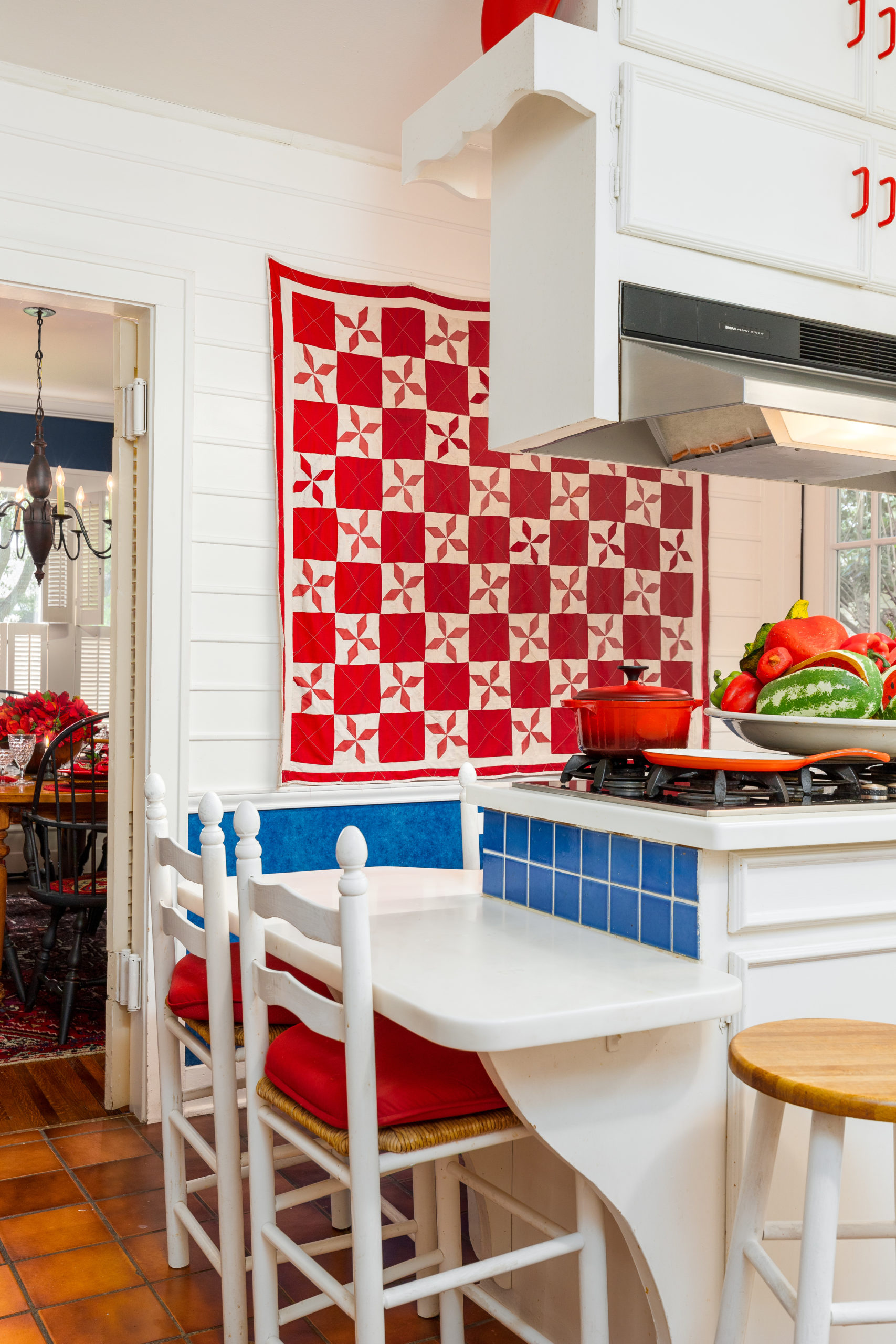 Now Donna has a collection of around 80 quilts, all displayed like works of art throughout the house. She is also a collector of antiques and primitive furniture, and has effortlessly incorporated the quilts, keepsakes and furniture she inherited from her mother into the design of her home.

One of the upstairs bedrooms features the most significant and meaningful part of the home — the childhood bedroom of the Fredericks’ son, Jake. Five years ago, Jake, who was an F-18 pilot, was on a mission off the coast of Japan, and he had to eject. “He died doing something he loved,” Donna reflected. “They had a three-year-old and a baby on the way. His wife continues to be so supportive of the military and teaching their kids about freedom.” 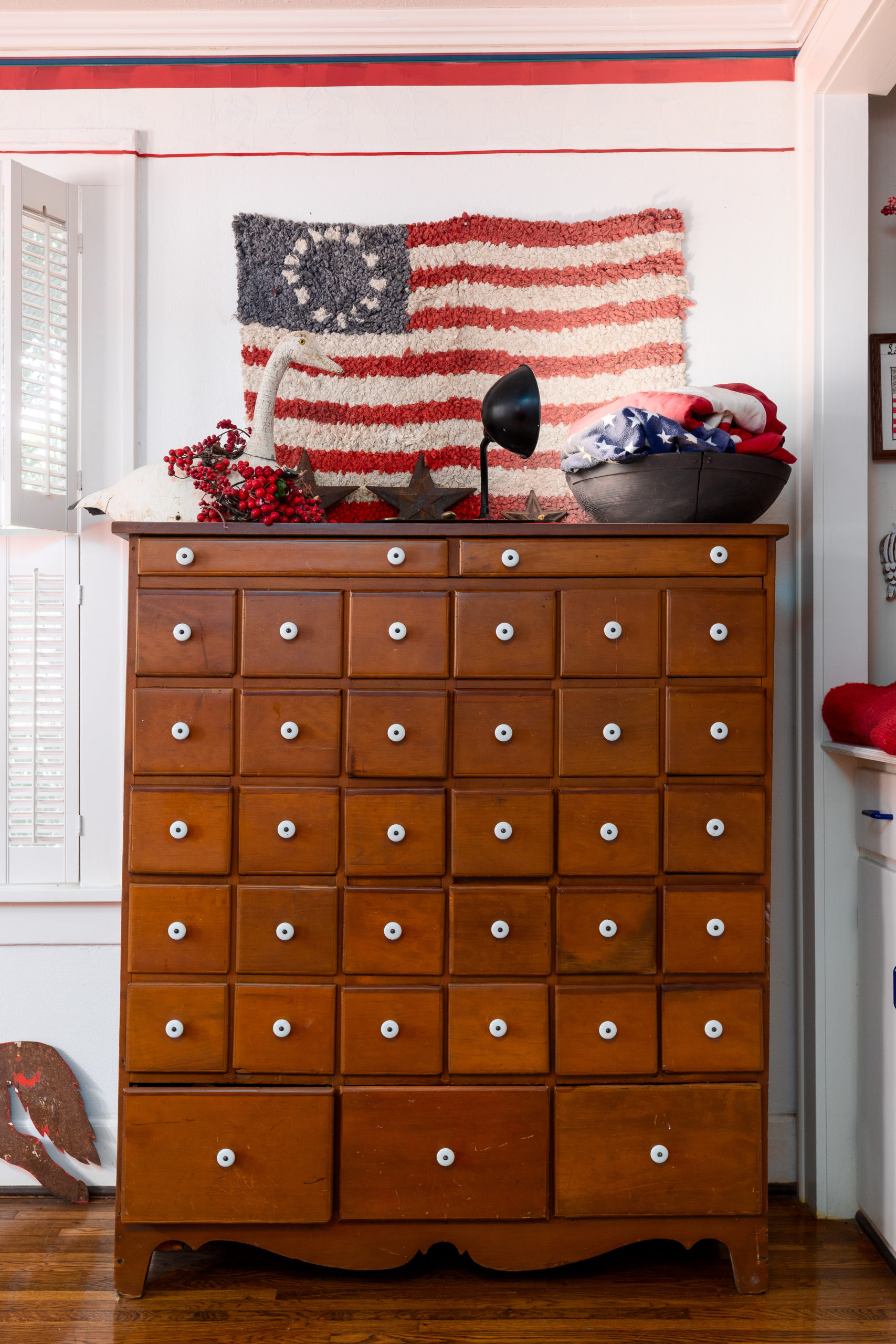 Donna and Larry have set up a memorial for Jake in his room. When the Fredericks first moved into the home in 1994, they painted a red stripe around the ceiling of Jake’s bedroom, and coincidentally “Red Stripe” ended up being Jake’s call sign when he was a pilot.

The Fredericks’ home is a true reflection of its owners. Their patriotism is evident in every corner. Donna and Larry’s connection to their family, the past and their love of all things American has given this home a soul that will continue to enrich their lives for years to come.