The Coastal Bend's Own Top (of the) Rock - The Bend Magazine 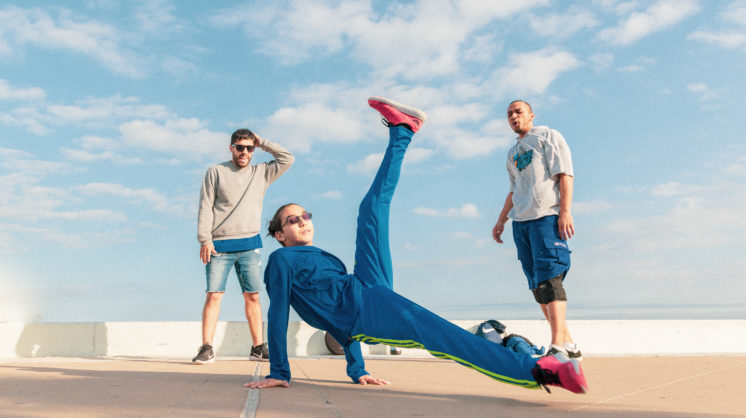 Jacob Murphy has been b-boying, more commonly known as breakdancing, since the age of 15. Breakdancing is ingrained in his DNA. Murphy let me in on some dance history from the Coastal Bend and discussed his come up with FSR dance crew (Flipped Side Rotten). There were only about four crews in the Coastal Bend during the late ’80s and ’90s, and the break scene is still alive but needs help to maintain its hold in the area. Murphy is still in touch with his friends through FSR, and with the arrival of his son, Murphy’s decision to start Corpus Christi Street Dance (CCSD) is a cultural gift to our city.

Murphy, concerned with the future of the culture, wants to leave a legacy for Corpus Christi and his son. With hopes of cultivating a movement for growth in the breakdancing community, he began holding sessions in the Cole Park Amphitheater. Weekly, he would bring music and intensity for lessons on breakdance fundamentals, popping, and locking – teaching those curious and willing to learn how to break. The Cole Park sessions allowed Murphy to gauge the public’s interest. Seeds were planted, and by 2014 his forest began to grow.

After receiving sound advice from a colleague in San Antonio, Murphy reached out to Corpus Christi Parks and Rec and applied to provide breakdancing classes. “I am an artist, and hip hop has this thing: ‘Each one teach one.’ That part of hip-hop really weighed heavy on me. I want to pass on the knowledge I have,” Murphy says. However, negotiations had to occur to bring the dance courses to fruition. Murphy wanted to provide classes for free since he wants to share his art; he and the city agreed on delivering CCSD for $30 a month.

“A dance class anywhere for 30 dollars a month is unheard of. There is no other class that offers what we offer in Corpus Christi,” Murphy says.

Since 2014, CCSD has been growing organically. For one year, it was the most successful program provided by the city. Murphy has received help from his compatriots throughout the years. He also stressed his appreciation and gratitude for Isaac Sanchez and his work to help the program. Murphy understands teaching is something one has to be passionate about, and not everyone has the capability. Especially with finding ways to pivot during COVID-19, when the dance courses moved online temporarily. The issue with online classes is the lack of connection made with students to engage and adequately teach. He admits, “The virtual classes were a success, but not my forte. I felt like I was leading a jazzercise infomercial.”

However, Murphy remains optimistic about CCSD going back to its roots. The program has had to pivot away from virtual classes, but there is potential for courses to begin again at Cole Park Amphitheater once it is safe to do so. What stands out most about this story, outside of the artistry and intention to teach the community about a rare culture, is his desire to give something bigger to his family. Murphy is aiming to provide a brighter future for his son; cultivating a community. This act of love is endearing and powerful. I don’t think there should be any concern about Jacob Murphy leaving a legacy for the next generation.