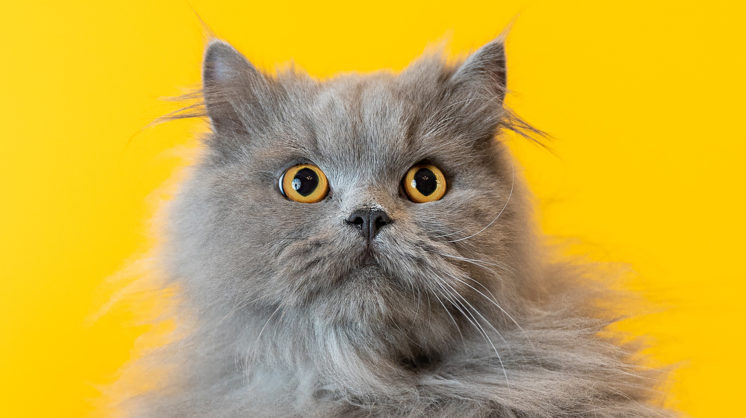 When encountering adorable things, our brains release dopamine, a chemical that makes us feel happy. So, to give our readers a dose of happiness, we put out that famous call for the Coastal Bend’s cutest pets, and y’all really came through. After sifting through 120 entry forms filled with photos of adorable pets, we narrowed it down to 25 finalists (even though we wanted to feature them all). Once we had that list, we turned the voting to our readers to decide who their faves were. From a playful Persian cat to a smart and protective mastiff, we present to you the six cutest pets in the Coastal Bend! Christopher has many dog-like characteristics. He loves to greet his family at the door when they get home from work, and he just loves to visit with guests. He’ll even carry his toys in his mouth to indicate play time. While most cats are territorial with their food bowls, Christopher will wait patiently until his two sisters are finished eating, and then he jumps in.

If I Fits, I Sits

Christopher loves to sit and peek through the back of kitchen chairs while viewing everyone in the house. He’ll prop his head up with one arm, or he’ll lay on his back and show off his cute tummy. Oh, but that’s not all – Christopher also loves to jump on your lap, even when you’re sitting on the toilet!

He’s never met a toy he doesn’t like, so you can almost always find Christopher excitedly running through the house while chirping as he plays with his toys – even if it means playing with his favorite toy, a crumpled Post-It. He loves his sisters, but his idea of fun is running off with a toy in his mouth, while they chase him.

If Christopher had the opportunity to be on any TV show, it would be ABC’s “The Bachelor.” That sweet, caring personality coupled with his beautiful eyes and handsome looks would guarantee him the spot as the next eligible bachelor. He would have every girl confessing their love and wanting to marry him.

With so much charm, good looks, and friendly nature, it’s no doubt that Christopher’s celebrity twin would be Ryan Seacrest. When it comes to a live-action movie, George Clooney would be the best choice for bringing Christopher’s voice to life.

Doll face Persians require daily brushing, but unlike other Persians, they don’t have the flat faces that require daily eye, nose, and fold cleaning. Don’t be fooled – Christopher is not a fan of brushing time and would much rather be listening to “Cover Me in Sunshine” by Pink or watching “Our Planet” on Netflix. Dusty’s cream-colored curls and long, silky ears are definitely eye-catching characteristics, but when those curls grow a certain length, they form tiny tornadoes throughout his entire body. As pretty as those tiny tornadoes are, Dusty does not enjoy having his beard or feet groomed!

Although he’s a grumpy old man who doesn’t like to cuddle much, Dusty will definitely curl up next to you. He is also very talkative with his needs; he’ll let you know exactly what he wants from you, whether it is food and water or if he’s craving some play time.

Dusty loves to run! He can run a good 4-5 miles with his mom. He also loves to play with his little squeaky ball, and enjoys a good piece of cheese for snack time.

If Dusty had a celebrity doppelgänger, it would be Walter Matthau – because he’s silly, cute, and grumpy all at the same time. Dusty is great at doing basic moves, but he’d be a great contestant on “Is Your Dog a Genius?” because when his mom asks him to do something, he pauses to contemplate his next move and after considering his options, often follows through with his own independence.

This grumpy old man isn’t much of TV buff, but he’ll surely bark at any doorbell sound coming from the TV. He’s super calm and relaxed, and you can catch him jamming out to “Tennessee Whiskey” by Chris Stapleton.

When Dusty was little, he loved to be chased, but he was tough to catch, so everyone made bets on who would be the lucky one! He loved it so much, that it’s all he looked forward to doing, even after his mom would get home from a long day at work. The adorable way he’d scoot his behind while running away made the entire experience fun and cute. Lulu’s long arms and legs help her swing around, but her tail is the strongest part of her body. One of her favorite activities is swinging around on ropes, and she loves to wrestle with her sister, Cammie.

Texans love their Whataburger, and Lulu is no exception. She begins jumping up and down anytime she sees it and begins to squeak with excitement! While Lulu loves all food, her favorite is Chicken Alfredo.

Even pets have peeves – Lulu’s is when you pinch near the end of her tail.

We all need some down time to sit and watch our favorite TV shows, and Lulu chooses to watch anything with animals in it.

Abu in Aladdin is one of the most beloved cartoon monkeys for any Disney fan, so it’s no surprise that he’d be Lulu’s celebrity twin. This mischievous monkey has a charming personality and cute quirks, just like Lulu, and they’re sure to win over the hearts of anyone who meets them.

Lulu is very affectionate and loves to snuggle and hug people. She can turn anyone’s frown into a smile anytime they see her or get to know her. Pigs are very smart, and if given the chance, Pistol would love to prove it to you. He has a Pig IQ of 104, which is basically Albert Einstein in pig intelligence!

Pistol loves grass, and will eat it all day if he could. He’ll basically eat anything that falls on the floor – including a Hot Cheeto that he loved. Once, Pistol climbed completely inside his food bucket, and was caught eating all the mini pig food pellets!

Pistol loves going on car rides, because he knows they mean trips to visit family or shopping at pet stores and home improvement stores. Pistol is a social butterfly, but during the day, he stays busy rooting around his blankets and stuffed animals, or he enjoys naps on a heating pad.

Don’t wake Pistol up from a nap – he doesn’t like it! He’d much rather stay asleep, dreaming of yummy food and endless fields of grass to play in and frolic.

Get ready to find Pistol on “American Ninja Warrior,” because he’ll do anything for the ultimate prize – food! Porky Pig will narrate these adventures, and his spirit animal, Kevin Bacon, will be in the audience, cheering him on! You can find him jamming out to “All Star” by Smash Mouth or watching “Vikings” and practicing his “war pig battle cry.”

Contrary to popular belief, pigs are super clean animals. The only reason pigs roll in mud is because they don’t sweat, so the mud keeps them cool. Pistol was house-trained early on, and he’s never had an accident in the house. He proudly uses his litter box, or he goes outside if he prefers. All Eyes on Me

He might be super shy when he first meets you, but once he gets to know you, Walter will be all over you and wants your attention non-stop. Don’t turn your attention away, though. That’s his biggest pet peeve!

A Celebrity Among Us

If he could, Walter would be known as @HowdyItsWalter, since he has already achieved celebrity status as the center of attention among his fans. I mean, who could resist the many different “hair styles” that he wears his ears in? If he did get his own live action movie, Dax Shepard would do a great job bringing Walter’s personality to the big screen.

Walter would love a spot as a celebrity guest judge on “Chopped,” so he could eat all the snacks. It would be even better if peanut butter were an ingredient, and they gave pup cups just like the ones at Coffee Waves.

Walter has a lot of favorite things: He loves the song “Cowboy in L.A.” by LANY and the show “Schitt’s Creek,” but his heart jumps for joy at the sight of peanut butter, the water fountain at his grammy’s house, his wool dryer ball, and his stuffed dinosaur named Milton.

Walter loves traveling around the city, scoping out local spots to find dog treats. One day, while driving down Rodd Field Rd., Walter found his soulmate in a fellow boxer riding in the next car. He spent the last 15 minutes of that car ride blowing doggy kisses.

Can’t Hold Me Down

Walter is one heck of a trooper. He spent most of his younger years at Windsor Park Animal Hospital after he suffered intestinal damage from swallowing a small bag and being anemic. You’d never guess that he’d been through so much if you saw this ball of happiness now! Today, you’ll find him sticking his head out the window during car rides down Ocean Drive and playing outside in his shark sprinkler. Sherlock has a majestic, yet intimidating presence, but this good boy is all about protecting his family. He’s smart, stubborn, protective, dominant, and fearless. Although he’s wary of strangers, he’s sweet and steady with loved ones.

All About the Bass

Sherlock is aggressive when needed and truly values family bonds, so if he could be any celebrity, it would be J.J. Watt. However, with his dominating personality, the perfect person to take on Sherlock’s voice in a live-action movie would be Barry White.

Sherlock would be perfect on “The Bachelor” because he’s confident and persistent. Girls would be eager to get a rose from this handsome boy after finding out that future dates would consist of crunching on ice cubes, eating peanut butter ice cream, and watching tennis matches on TV.

Sherlock appreciates neighborhood walks, long afternoon naps, lounging under a shaded tree, or hanging out poolside while vibing to The Bend’s “Staycation” playlist. Don’t interrupt those naps, though! He’s not a big fan of doorbells or anyone waking him up from a nap with a task.

Sherlock loves his long afternoon naps and playing with children. In fact, his parents considered changing his name to Ferdinand, an homage to the bull with a big heart mistaken for a dangerous beast, but who preferred to sit under a cork tree.

Sherlock can spell two words – Walk and Treat! When spoken to, Sherlock tilts his head sideways to get a better understanding of what you’re saying. He’s super focused and can sit for minutes at a time staring at his owners or guests, but don’t let that intimidate you; Sherlock is 150 lbs. of love and wrinkly affection.