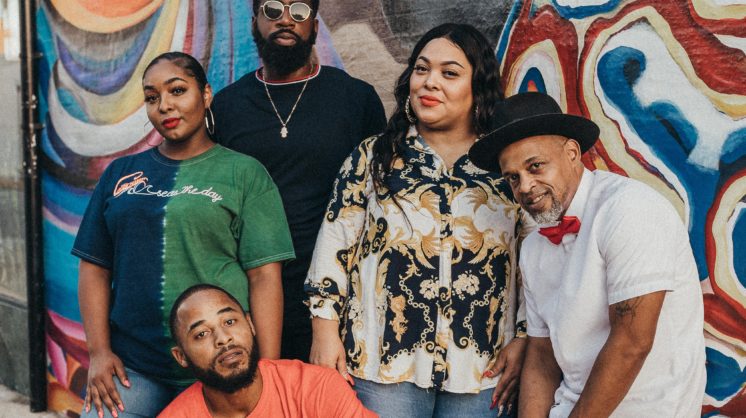 Our story begins with food. It all started with the idea of shining a light on the local food trucks and restaurants in Corpus Christi. After sharing that inspiration with his closest confidantes, Jacolby Satterwhite realized a bigger impact could be made, in an even more significant way, by involving the whole community. That allowed for his initial idea to be manifested and evolve into a local hit program: The Clinton-Peabody Show.

Satterwhite is the host of the local live broadcast, but as he likes to highlight, the show would not be as dope as it is today without his team being a driving force in its success. The show spotlights local arts, culture, cuisine, music, and other lifestyle topics in the community. The Clinton-Peabody Show is named after the street Satterwhite lived on. Growing up in the Hillcrest area, he was influenced and inspired by the culture and history of his community. In 2017, the city began tearing down the Hillcrest neighborhoods to make way for the new Harbor Bridge. Hillcrest, one of the last majority Black and Hispanic neighborhoods left in Corpus Christi, is a sad memory for Northside natives, such as Satterwhite – but it helped fuel his determination to start the show and promote positive representation for Corpus Christi.

“The gratitude is so real that the city stole our neighborhood and we still decide to give back to the city,” Satterwhite says in regard to the show itself.
Satterwhite describes The Clinton-Peabody Show as evolving into a type of directory, giving direct access to the local guests he features on the show. Through the show, the community can find out about businesses, local artists, and restaurants that many people never knew existed. Not only does he want to spotlight the people in his community, but he also brings awareness and attention with a “wave” that he hopes the people can relate to. As an athlete with a basketball background as his foundation, Satterwhite relates his community peers to his teammates, and feels that it is his responsibility to place them in positions for them to succeed. “My goal is to use the show as a platform to bridge the gap between all ethnicities, all cultures and all of the people in my community,” Satterwhite says when asked what he hopes the show brings to our community. “They took our bridge, so I became the bridge!”

But securing guests is not always easy; he said people can be reluctant to record live, and scheduling also plays a major role – we all can relate just to how hectic life can be! As we dive into what takes place behind the scenes, Satterwhite said production is a whole other entanglement of its own. The show is recorded live, which calls for a production team to aid in pulling off a successful broadcast. Satterwhite has a team of five who come together for show content, research, business affiliations, camera operations, and photography…just to name a few roles that his team fulfills. Aside from the show, Satterwhite runs a basketball training camp in South Texas, called Supreme Training, and is a rapper, community activist, and up-and-coming Coastal Bend entrepreneur; he and his partner sell and market a clothing brand called The WaveGods Supreme. Essentially every facet of Satterwhite’s life comes back to the love he has for this community and he continues to pour that into each of his ventures.