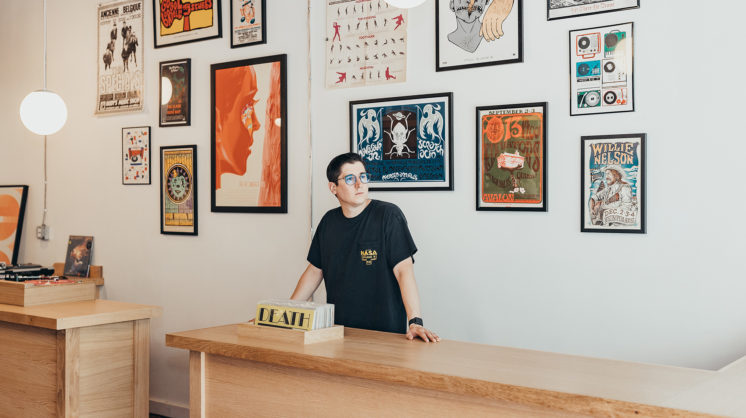 It’s not just the pulse of the record as it spins round and round. It’s not just the liner notes spilling out pieces of audible poetry. It’s not even the sounds emanating from the speakers. It’s the discovery, the feeling of elation while perusing the bins in search of that perfect LP, that signature sound that’ll enhance the room with every rotation and inspire conversations to be had. This is the culture and cultivation that Hybrid Records hopes to expand on in its new downtown location.

A native of Corpus Christi, Carlos Cooper originally opened Hybrid Records in 2015, hoping to fill the niche for encountering music in a physical medium. And though, like many businesses, the record store has had its share of struggles (including surviving during a pandemic), Cooper recognizes the importance of community in keeping a space like this alive and thriving.

“We’ve always had good support from the community,” he said. “As a born and raised Corpus Christian, I have an investment in this community, and I think people see that. So we’ve always had a lot of support, and it’s just continued to grow every year.”

Though the business was originally started with little money and a more DIY sentiment, it has since grown to encompass an attitude of augmentation and expansion. In late 2021, Cooper made the decision to move the shop’s location for the first time in its existence, and join the renaissance that is a growing downtown scene.

“Corpus Christi wants downtown to grow, yet very few people have invested in that growth,” Cooper said. “Retail is a huge part of what makes a successful downtown in any city, so it was important for me as a native of the area to be a part of that revitalization and invest in the future I want to see for my city.”

With six years of business, experience and a loyal following under its belt, relocating the shop and bringing another retail option to the area not only felt right, but important; and with neighbors such as Commons and local producer El Dusty’s PRODUCE collective, Hybrid Records fits quite nicely into the symbiotic block that is Peoples Street.

The new location’s design is reminiscent of a Japanese-style listening bar, featuring clean lines, natural elements and an intimate environment with a retro feel. For Cooper, Hybrid Records, regardless of the address, has always been about creating a communal space. One where, yes, you’re encouraged to buy vinyl, but you’re also inspired to converse about art and music and everything in between.

“You don’t just come in to shop; you come in to catch the whole vibe of the space. We hired [designer] Justin Gainan to build out the space, and that’s really allowed us to elevate everything,” Cooper said. “So yeah, change can be exciting … new, shiny things and whatnot. But also just in terms of the intangibles, to be able to envision the future and how much further we can take this – like collaborating with surrounding business owners to curate unique community events and encouraging people who might not have been to the downtown area since living here – that’s almost even more exciting.”