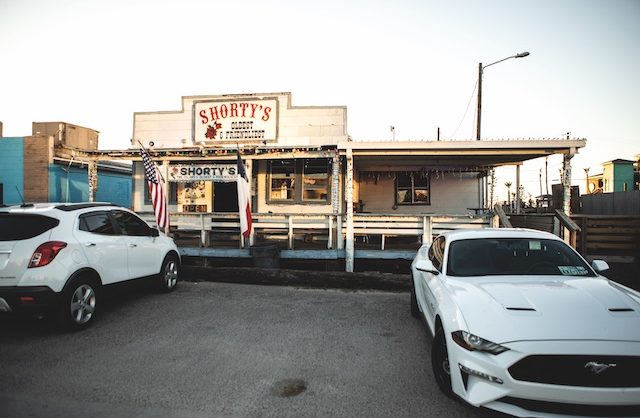 If your perception of a dive bar is anything but friendly, Anthony Head and Kirk Weddle are on a mission to change that. In their book, Texas Dives, readers are taken on a tour of dive bars across Texas to set the persona straight, as establishments that create a common ground between people where no other commonalities exist. The pair reclaim dive bars as “neighborhood bars” that remain “omnipresent” among varying demographics of people.

Suddenly, upon reading, a dive bar feels like an integral part of local history; a never-changing establishment that houses the stories of ever-changing people within its walls. The neighborhood bar doesn’t discriminate and the stories of such have inserted themselves into “a sweet spot within Texana” as Head says.

Enter Shorty’s Place, the “oldest and friendliest.” Whether that’s a local or universal depiction, some would argue it’s both. Regardless, Shorty’s Place is an integral character of old Port Aransas, a version of the town locals say is fading away.

Up until now, places like Shorty’s have stood the test of time and have provided refuge for the third shifter getting off work, the freelancer, the beach goer and everyone in between. When people talk about Shorty’s, it’s never about craft beer or cocktails, because the friendships transcend anything the menu has to offer. The term “drinking buddy” takes on a whole new identity, as a cherished relationship between two opposing minds formed over a couple of cold ones.

“Texans believe in Texas institutions. Whether it’s a barstool or a church pew. They are concerned with their traditional place for fellowship going away.” Head elaborates on the new developments in Port Aransas pushing these establishments out. “There is a dire sense of angst that the future is arriving at their doorstep and nobody invited it in.”

Head recalls the local posture toward the progress in Port Aransas that is a common thread among all the establishments depicted in the book. Because of this, Shorty’s will be moving locations at year’s end, taking its well loved building along with it.

Shorty’s represents the simple things in life. It represents kind, humble people, the kind of people that are often the driving force of good in the world without even really knowing it. Its crowd is just as quirky, unique and well loved as the hundreds of hats that hang from the ceiling. If you haven’t stopped by the bar in some time, drop everything and pay a visit to this small but mighty corner of Texas History.

Be sure to get your hands on a copy of Texas Dives and stop by Shorty’s Place on Wednesday, August 31st to meet the authors and get your copy signed!