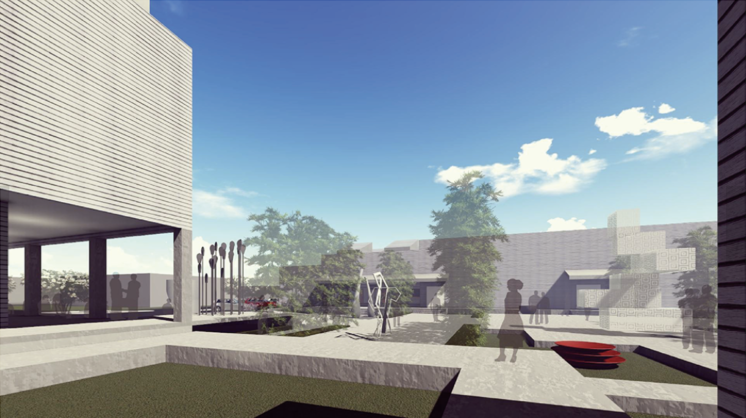 By: Jessie Chrobocinski  Render via: Rockport Center for the Arts and Richter Architects

Construction is officially underway on Rockport Center for the Arts’ (RCA) new 2,000-plus-square-foot facilities on its 1.18-acre campus in the heart of downtown Rockport. RCA’s former home, the historic Kline’s Café Building, was recently moved to its new location to make way for the groundbreaking. Because of the building’s historical significance, it was moved to its new location as opposed to being demolished.

In 2020, RCA retained an architectural historian at Amaterra LLC to prepare historical documentation regarding the 70-plus-year-old structure. Kline’s Cafe is considered significant under Criterion C, architecture, as an excellent example of Art Moderne at the local level of significance.

Kline’s Cafe, a local business with 80 years of operation, is now in place to be positioned on the new foundation located at 504 S. Magnolia Street. The 1940s-era Kline’s Cafe began its move in March, and a joint effort between RCA and new owners, Upside Ventures LLC, of Austin, Texas, positioned the property four blocks over in just a day’s journey. See the cool time-lapse video of the historic move here.

In 2017, the former RCA building sustained damage during Hurricane Harvey, determining a total loss that exceeded $1.2 million. With determination to move forward, the Board of Directors challenged the State of Texas to Imagine the future for Arts, Culture, and the Humanities in 2018, subsequently launching a major gift campaign to build a new campus. By August 2020, the Imagine campaign had reached 98% of its $4.5 million goals.

Improvements to the new RCA location include the 13,000-square-foot visual arts and art education complex, as well as an 8,000-square-foot performing arts facility and convention center featuring a culinary arts education kitchen and multiple break out rooms. In addition, there will be a 16,000-square-foot outdoor sculpture garden housing works from the permanent collection. Construction is currently underway and scheduled for completion in June 2022.

We cannot wait to see what this new era for the Rockport Center for the Arts looks like and the wonderful art and community events that will take place within its grounds. Visit their website for updates and more information!