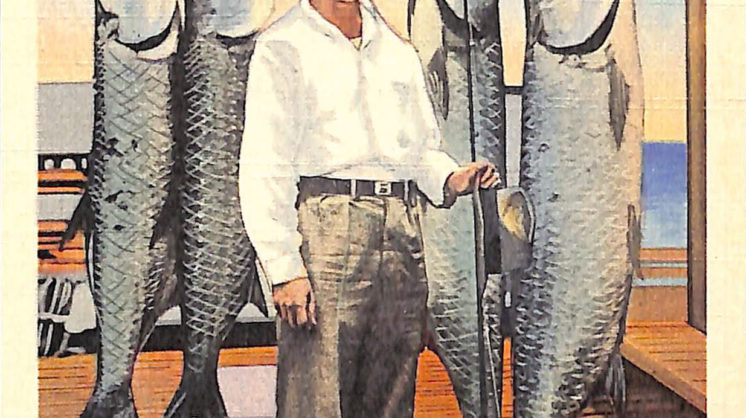 Fishermen from near and far sought a photo like this — triumphantly standing next to their tarpon catch of the day. Port Aransas was once named Tarpon, Texas, in honor of the fish that made it famous. Catching a tarpon was a bucket list item, and fish were often photographed then displayed instead of being released, as they aren’t known to be good for eating.

The Atlantic tarpon evolved millions of years ago, and still looks like something prehistoric. It can be enormous, growing over six feet and weighing over 200 pounds. It can be seen jumping up to 10 feet in the air, with gills so powerful they create a sound audible from a nearby boat.

In 1932, resident Barney Farley organized the first Tarpon Rodeo, which lives on today as the Deep Sea Roundup. The area thrived with the tourism tarpon brought to town — through events like the Tarpon Rodeo, as well as knowledgeable local guides and a thriving industry for angling supplies including boats and lures.

By the 1950s, the tarpon population was smaller and local fishing became focused on a broader range of fish. This continues to fuel Port Aransas’ fishing industry today, although some still search for the thrill of its former namesake.

The fight to reel in a tarpon in Port Aransas was certainly something to write home about, as no doubt many did on postcards just like this — with a one-cent stamp for postage.