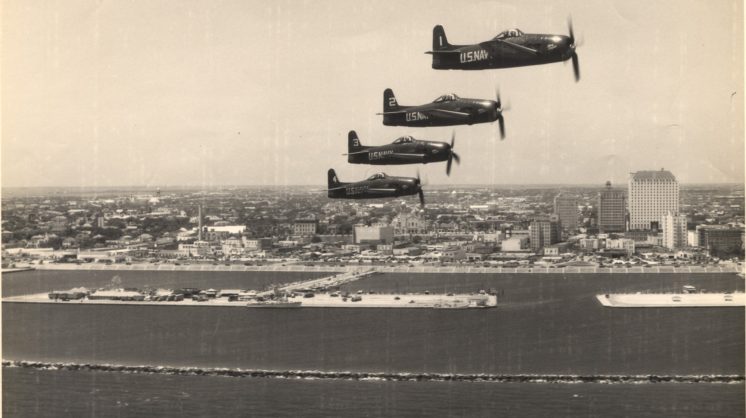 For decades, residents of the Coastal Bend have gathered to watch the Blue Angels perform in the skies around Corpus Christi during air shows. Naval planes in the sky have been common since the 1941 opening of Naval Air Station Corpus Christi and its outlying airfields, but seeing the Blue Angels in action is always something special.

Founded as a U.S. Navy flight exhibition team in 1946, the Blue Angels were charged with maintaining interest in naval aviation following the end of WWII. The team followed the Naval Air Advanced Training Command in its move from Jacksonville, Florida, to Corpus Christi in 1948, calling NAS-CC home for just a year before returning to Florida and briefly disbanding during the Korean War.

In 1951, the Blue Angels returned to NAS-CC and the skies over the Coastal Bend. Residents got to watch not only the air show demonstrations they’re known for, but the day-to-day workings of the team as they trained and traveled across the nation.

Even though the team hasn’t been based here since relocating back to Florida in 1955, it’s not uncommon for Blue Angel pilots to return to familiar skies when flying demonstrations in Corpus Christi: NAS Corpus Christi and NAS Kingsville are both hubs for training Navy and Marine aviators. With yearly demonstrations in the Coastal Bend, we still have opportunities to participate in this small slice of Corpus Christi tradition.