Milkmen on Parade - The Bend Magazine 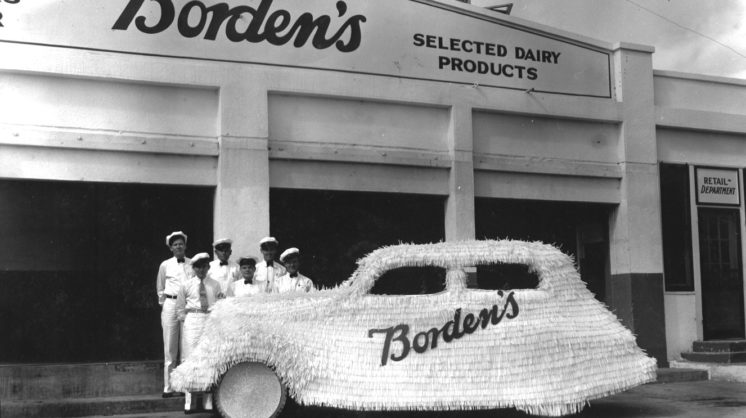 You don’t have to go back very far to come across memories of a uniformed milkman delivering glass milk bottles to each house. A community fixture, Borden’s business was booming in the 1930s when this photo was taken. The Borden name was on cheese, ice cream, and milk as the largest distributor of fluid milk in the nation. It was a staple at local soda fountains and drive-ins, with large signs bearing the company’s name displayed across town.

Corpus Christi’s earliest history with Gail Borden, founder of Borden Dairy, came in 1852 when the city’s founder, Col. Kinney, held the Lone Star Fair to attract people to his new town.  The 2,000 attendees filled the exhibition hall with agricultural and handmade goods, and prizes were awarded to the best. Borden’s prize came not for a dairy product – he wouldn’t invent the commercial method for producing condensed milk until later – but for a meat biscuit that also won awards at London’s Great Exhibition in 1851.

While Borden’s meat biscuit didn’t catch on, his contributions to the dairy industry cemented his place in history, and in the memories of generations of people across the country who have enjoyed Borden milk and ice cream, or waved to the milkmen on parade.