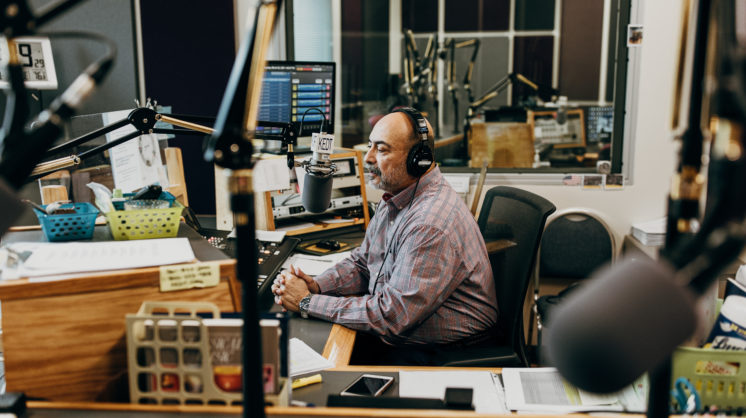 KC: Let’s start with a bit of background information. How did you get into the radio industry, and how did it lead you to where you are now?

LG: I attended Ben Bolt-Palito Blanco High School, and it was there that I got a glimpse into what would eventually turn out to be my career. I had suffered a football injury when I was a junior, and couldn’t play sports anymore. Since I had been involved in UIL Speech competitions in junior high and high school, my speech teacher gave me a brochure about radio classes sponsored by Lamar University in Beaumont. That summer (1974), I attended the month-long radio class, and absorbed all I could about it. The end result of the course was getting your FCC license for future work. After graduation, I returned to Lamar University and continued my work at the university station, which was an NPR affiliate. I also managed to get involved in some commercial stations in the Beaumont area, and even did some TV production work. Those experiences led me to begin, literally, at the bottom. I worked as a voice on a small station in Alice, and began doing news. I eventually moved into the production area when stations began to cut back on news departments. I stayed in production for over two decades. Now I’m here at KEDT-FM. The road has been long and interesting, and there’s never been a dull moment, which is something that keeps me very excited about what I do.

KC: So, you’ve been in radio for almost 50 years now. Why do you think you’ve stayed in the industry for so long?

LG: I’ve been able to adjust to the constantly changing situations in this industry; much of it has been embracing the technologies that we now utilize. Keeping a close group of confidants is also a good thing to have in the business. I also believe that listeners have come to trust what I do, and how I present whatever the situation is, whether it was in production, on air or news.

KC: Do you feel the advancement of technology has affected your listeners and how you approach them?

LG: Technology has definitely raised the bar – not just for listeners, but for us, too. We’ve had to advance our game to include new in-house technologies, as well as introducing listeners to our streaming channel. The strength of streaming our signal not only gives listeners another listening option, but opens our station to a global audience. So technological advances are things we always keep our eyes on to see if our listeners would benefit.

KC: What would you say is the value of public radio?

LG:  I believe the  value of public radio is in its message. While there are many types of public radio stations, I would venture to say that in the case of our station (KEDT), the passage of information without forming a decision for our listeners to take is the best that’s offered to the public. There’s never a push given to opinion, but rather [we] let the listener get the full story, and let them decide for themselves. That’s a strong point in what we do here.

KC: Why do you feel public access to trustworthy, local news is so important?

LG: Radio listeners, and especially KEDT listeners, have come to trust what we broadcast long before I entered the picture. Local news is the heart and soul of any type of news coverage. As the saying goes, “all news is local news.” And it’s true! It’s local news that connects people with the proper flow of information.

KC: Why do you think public radio is able to remain relevant when so many people are getting news from other outlets?

LG:  The key to what public radio has to offer, in our case our affiliation with National Public Radio and the Texas Newsroom, is to present our stories in a straight, no-frills manner. Lay out the situation, don’t pursue a side in the issue, and present the story in a non-complicated way. Staying out of partisan presentations is the best way to present our stories to our listeners. John Lennon once said, “Give me some truth!” I’d like to think that we follow that particular route.

KC: Do you ever get nervous when going on air anymore?

LG: There are times I still get jitters, but not that often. After so many years behind the mic in some sense, it’s just become second nature for me to just set up and go. We recently started a series of town hall sessions on different issues, and in both recent cases, I did have a few butterflies since it was live and we had a panel of experts to confer with. That can sometimes be a little intimidating.

KC: What advice would you give to people when it comes to navigating the news cycle in an undaunting way?

LG: I would tell them to be very careful when it comes to listening in today’s evolving news cycles. There’s so much misinformation, and it’s very easy to access. Take time to listen carefully to whichever news source you choose.

KC: Take us through a day in the life of Lon Gonzalez.

LG: A day in the life, let’s see. I’m up very early in the morning. It’s something I’m used to from so many years of radio work with a morning team. Once I get to the station, it’s off to checking news sites and networks for news stories that will hopefully be useful for our listeners. Keeping track of our network while I’m on the air is a must, because news changes quickly. Once I’m off air, I work on getting some phone interviews with various folks whose stories would be of both interest and value to our listeners. Most people are very receptive to the idea. Our big newscast comes at noon, and we try to fit in as much as possible – to not only inform our audience, but entertain them as well. Once I’m done, I head home to my lovely wife and two dogs, and do some work around the house.

KC: What is your favorite part of being a radio host? Any favorite memories you’d care to share?

LG: My favorite part of being a radio host is bringing something different to listeners. I’ve tried to incorporate a mix between what I think a non-commercial and commercial station should sound like: being informative, but not being so unattainable that people won’t be able to identify with what you’re doing. It’s something I’ve tried to accomplish working at KEDT. Insofar as favorite memories in radio? I have lots of them, but you’ll have to be on the lookout for the book that I’ll write one day.