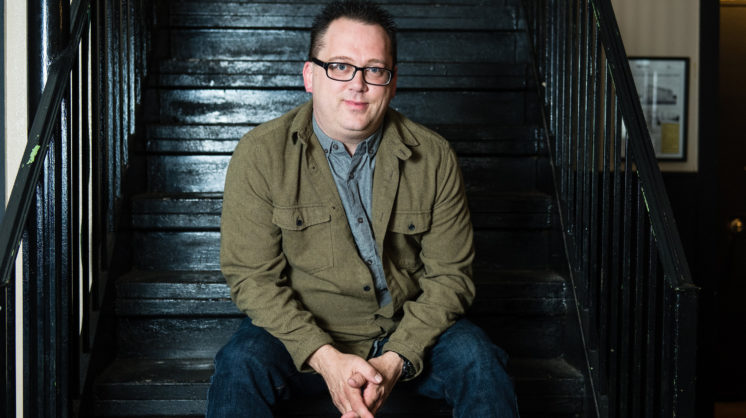 Is comedy something you have always been interested in?

Oh yeah, since I was a kid – about 8 years old. I was a bit of a class clown in second grade. I would watch Saturday Night Live, then go to school and tell my friends about all the jokes I learned. I got into trouble for this, and as punishment, I was forced to stand up in front of the classroom and tell the jokes to the entire class. Joke was on them – I loved it!

How did you get started in the local comedy scene?

Aside from my comedic antics in grade school, in 2003, I took a chance on a guest spot during a paid show hosted by The Oasis Bar and Grill. It wasn’t what I expected, so I went in a different direction. Sunrise Mall housed a comedy club called Crazy Times, and they held open mic nights every Wednesday. I’d never done open mic, and I was a bit hesitant, but I was asked to go on stage, and what do you know – it was a “Funniest in Corpus” contest – and I won! That was the beginning of my journey, which would eventually bring me to booking, managing, and hosting shows.

How has the comedy/stand up scene in the Coastal Bend evolved over the years?

It has evolved by leaps and bounds. A lot of promotion was required to grow the audiences, but it was well worth the effort. I hung flyers at local colleges and universities, and ended up with more eager comedians and audience members. Now, we have Chuckles Comedy Club, and Comics Live, which I’ve run for nearly 10 years. I opt for booking popular faces, such as Dustin Diamond, Mike Epps, Jim Breuer, Pauly Shore, and Jake the Snake, along with some local comedians, to draw bigger crowds. I feel that by adding comedy shows in snippets, people may be more inclined to remember the acts, and come on by to see other shows. So far, it’s been successful.

What do you hope to see for the future of the comedy scene here in Corpus?

I hope to see a full scale dedicated comedy club in Corpus Christi. Since Crazy Times closed in 2009, Corpus hasn’t had any full-scale comedy clubs. Comedy is such a conditional environment, and because of that, it’s difficult to find a place to set up a mic stand, and have a dedicated crowd come by strictly for comedy shows. Mesquite and Bella Luna have been great, but they are also Italian restaurants that happen to also host comedy shows. With how much comedy is evolving in Corpus, I’m hoping to see this happen in the near future.