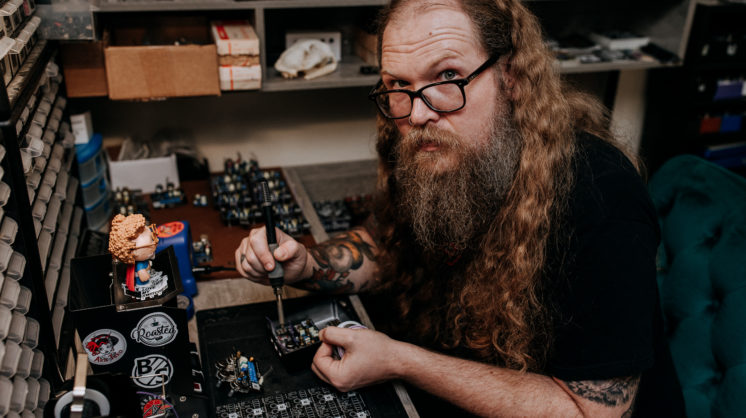 First, tell me a little about yourself and how making custom guitar pedals comes into that story.

Well, I’ve been playing music for most of my life, but I come from a tinkering kind of background. As a kid, my dad would strip the paint off this and that and change the hardware on his guitars constantly. I was always there, either helping out – or losing screws and parts.

Growing up, I wanted to find ways to get more out of whatever I was playing. So, I would always take things apart just to find out how they worked. At one point, I needed to fix my pedals because they were constantly breaking. So when my main distortion pedal died (ProCo Rat) I ordered one off eBay and by the time it came in, I had my main one fixed. I noticed they sounded different – that’s when my inquisitive-self kicked in. I started looking for broken ones and decided to make myself the best Rat pedal ever made, and that became “The Mountain” (the first pedals sold for Frost Giant Electronics). That’s when people began to take notice.

So, after you created The Mountain, Frost Giant Electronics began to take shape?

Frost Giant Electronics actually started as a clothing company for bootleg shirts for my buddies! I would make 5-10 just to make grocery money. I made a few Mountain pedals because an enclosure company accidentally sent me five cases instead of two and told me to keep them. Those then became the start of what Frost Giant is now. I made them just to see the interest and once I put them up on Facebook, they sold the same day. Then I moved on to the Massif build. Then last year, I was able to quit my job, and have been doing this full-time and loving every moment of life.

So what really was the deciding factor to launch your own business?

The push of my friends, honestly. I was just doing this as a hobby because I really like to learn different things and always try to grow, but a lot of people pushed me to really focus on this full-time. I felt like I had a solid product and a good name behind it, so it was time to go from hobby to business. You know, that’s one of the hardest things ever, and if anyone who’s trying to break on through is reading this – just do it, man. If you have the clientele and a solid product, just take a chance on yourself.

What do you hope a customer of yours feels when they purchase one of your custom pieces?

That it is the best Fuzz Box they’ve ever had! I’m a little OCD, so I wire and put together every pedal. I test every single one, and all my builds are uniform and clean. I take pride in what I do, and want the customer to see that. Everything has to be good: the box, art, color of the pedal, solder joints, high grade parts, like, EVERYTHING has to be solid as hell, so when the customer gets it, they think a machine made this, and is blown away it’s just done by one dude with one soldering iron. I want them to have to call Guitar Center and ask when they are getting a shipment in. I want to serve up the best fuzz pedal you’ve ever had, and guarantee you’ll be back for seconds.

How do you feel about the company’s growth since its inception?

I’ve only been in this game for three years, and fully [only] this year. I’m in love with the growth. I’ve put the work in the beginning, and now I’m seeing the clouds clear. It took it a few years to build the foundation, but I’m glad I worked at it. I hope in two years you’ll see my builds in Guitar Center, that’s a goal. Also to have a full shop here in town and get some help, I’m running on steam, son! But yeah, a shop where me and my buds can build and I can grow this into something real, and by that I mean it can support people and maybe get people insurance. Just dreams, but ones I want.

You’ve done collaborative work with this as well. Do you have a favorite collab?

Man, there are so many, The Maryland Doomfest is definitely a favorite one. Every year they get a new artist to design the flyer and I use that art on the pedal. This year is such a cool design; I’m stoked to put it on a pedal. The Pedalboard of Actual Doom Massif is a big one. That one was a green Massif with an old piece of art of the Four Horsemen of the Apocalypse – a demo was done by an individual called Does It Doom and that pedal took off, which became a purple version that was shipped off a few weeks ago to customers and dealers.

You’re a pretty innovative guy and dabble in other creative outlets. What are some of the other artistic projects you’re involved in?

I’m the vocal and guitar for Switchblade Jesus, which is my heart and soul, and also an artist. I do album art and layouts for band, art and flyers for a lot of local bands including my buddy Hec from Periwinkle. Graphic art has been a main focus of mine, but last October I got an iPad with a pen and got heavily into Procreate and have a blast with that. Also, I just got into figure making with silicone molds and resin. I would like to create a figure to put in with my limited-edition pedals, I think that would be rad to get in a package. I’m constantly into stuff.