Less is More - The Bend Magazine 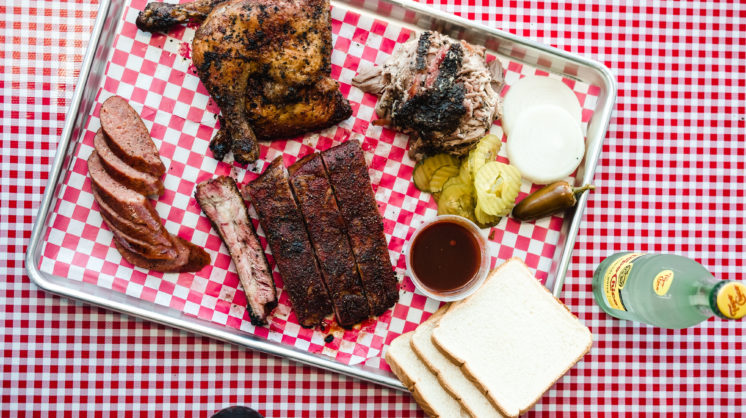 Founders of Salty Oak BBQ, Travis and Rita Brem, hope to bring the classic version of [Central] Texas barbecue to the Coastal Bend. Located at 4301 S. Alameda, Salty Oak BBQ is thrilled to put Corpus Christi on the map as one of the best regions in Texas for good ol’ “low and slow” smoked barbecue – seasoned with a simple rub and fired with post oak wood imported from Austin.

“I’ve been a Corpus Christian since 1989. I’ve heard it echo throughout the generations now, South Texas is more of a mesquite wood,” says Travis. However, due to its use of post oak wood, he says, “Central Texas-style barbecue is arguably the best BBQ in not only Texas, but the nation.”

“We also don’t let too much get in the way. We use minimal rubs, salt, and pepper for the most part. We let the fire and the process of the cooking itself do the flavoring. We don’t use conventional indoor smokers; I have a 1,000-gallon propane tank converted into a barbeque pit, enclosed on a flatbed,” says Travis.

“We do everything the traditional way. We’re talking as early as the 1800s, when the Czechs introduced smoking meats to Texas.”

Salty Oak’s main attraction is The Big Salty Sandwich, starting with a bottom layer of sliced pickles and onions, stacked with layers of brisket and close to a pound of pulled pork, then topped with house-made coleslaw, three sausage coins, and house-made barbecue sauce. It’s a monster – and a best-seller. The runner-up is their street tacos with four double-layered corn tortillas seared in canola oil, filled with pulled pork and topped with sauce and slaw.

Salty Oak offers brisket, pork shoulders, pork ribs, sausage, chicken, and turkey by the pound, as well as scratch sides including slow-cooked beans, potato salad, and coleslaw, made by Rita Brem and offered in individual sizes or by the quart. Quench your thirst with house-made tea (a customer favorite) or Mexican colas, or BYOB.

For more information, follow them on Facebook and Instagram (@saltyoakbbq), and be sure to book all your catering needs by contacting them at saltyoak711@gmail.com. Or head to Salty Oak in person, and bring your appetite.