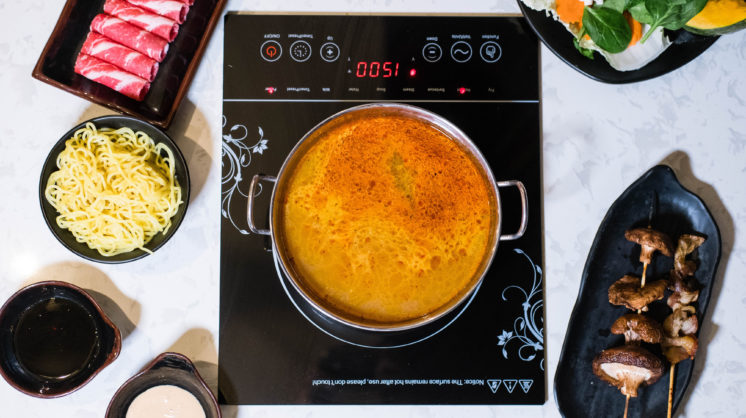 When walking into Shabu Shabu Hot Pot and Grill for the first time, it’s hard not to feel like you’re in an upscale restaurant in Austin or Las Vegas. The atmosphere and cuisine are altogether different from any other eatery in Corpus Christi. Shabu Shabu Hot Pot and Grill is the passion project and dream of owner Lenny Le and his two business partners, Peter Phat Nguyen and Huy Nguyen. The three men’s wives have lovingly nicknamed them The Three Amigos. The restaurant, born from Lenny Le’s love of soups, opened its doors in March 2018, bringing a first-of-its-kind experience to the city. According to Lyly Nguyen Le, co-owner, and wife of Lenny Le, that’s the whole point.

“You come in, you feel the aura, and you take your time. It’s not going to be fast food, so don’t expect to be done quickly,” says Le. “It’s not just about eating; it’s the experience.”

The idea of the hot pot is simple. You build your own pot by using a three-step process beginning with choosing your broth. Next select your protein; choices include the ever-popular ribeye or pork options and the more adventurous squid. For the third step, add noodles or rice. Soba noodles are a customer favorite.

After the hot pot is delivered to the table, it is up to the customer to cook it. Shabu Shabu hopes that Coastal Bend residents will embrace this unique dining experience when they realize how easy and relaxing it is. “If you love soup, you’ll love this. And it really isn’t that hard,” says Le. “All you have to do is swish, swish your meats (in the broth) — then you’re done.”

From fresh ingredients to the potential for a wholly new experience, Shabu Shabu Hot Pot and Grill is already making a lasting impression on the Corpus Christi food scene. And that’s what matters most to Le and family.

“We are dedicated to making sure that everything is fresh, tasty, and consistent. The majority of people don’t know what Shabu Shabu is yet. We just have to take our time and teach them,” says Le. “And what we’re finding out is that the people are willing.”