Gilbert Cantu and The Art of Bonsai - The Bend Magazine 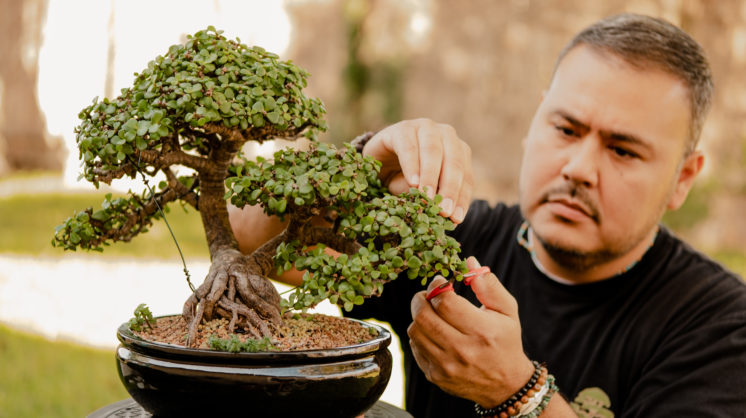 The climate in Corpus Christi can beat down on some plants, make them bend their backs away from the sun, turn toward the soil, and lay down forever. But some plants thrive; some find solace within the Coastal Bend. Among these is the portulacaria afra, or little jade bonsai.

Local graphic designer and painter Gilbert Cantu knows a thing or two about this, as he’s added “bonsai expert” to his list of talents—hence the creation of his Little Jade Bonsai blog and its accompanying YouTube channel.

“I got started 19 years ago, when my wife was pregnant with our daughter,” Cantu said. “We went to Target, bac when Target actually had a garden center, and I saw a bonsai tree, a juniper, and I thought, ‘I wanna try that.’ I think we’d just watched The Karate Kid. “I don’t know, I caught the bonsai bug, man,” Cantu continued. “I just became so interested in it, started reading about them, started ordering all these trees, different species off of eBay. I became addicted.” Within a month or two, Cantu had accumulated around 50 trees, and within the next month, he’d killed every single one of them—except, that is, for the jade. “I thought, ‘If I can keep this one alive, maybe I’m doing something right. Maybe I should focus on that species.’”

That focus shifted into not only becoming adept at growing and trimming the little trees, but also in sharing his journey across multiple platforms, both virtually and in person.

Cantu’s Instagram page has amassed over 26,000 followers, and his YouTube channel has more than 9,000 subscribers. He also works with the Corpus Christi Bonsai Club and leads workshops and demos, sometimes in his own home. It isn’t enough for Cantu to gain more knowledge and respect for the art of bonsai; he wants to share what he’s learned with people from all over the world.

“I didn’t create Little Jade Bonsai to be a nursery or store,” Cantu said. “I just wanted to post and share my trees with everybody.” His followers began asking more questions and seeking tips for their own trees, and from there, Little Jade Bonsai began to snowball into what it is today.

“It’s awesome because I literally connect with people all over the world, and the [coolest] thing about that is it doesn’t matter what religion you are, what country you’re from, what background you are. I talk to people in India, in Iran, in Australia, South America—so many countries, but we are all brought together by our love for nature and for bonsai.” While Cantu finds fulfillment in the trimming and care of his trees, and in sharing that with people, it’s the simple act of doing it that drives him, the simple pleasure of bringing nature into an urban existence.

“I’m a very spiritual person,” Cantu said. “I love nature. I strongly believe in taking care of our environment and loving nature and loving mother earth, so it’s an art form. I always wanted to be an artist when I grew up, and I always had teachers telling me I couldn’t; that I could do it on the side, but not actually be an artist. But now, I’m a graphic artist, a traditional artist, and a bonsai artist, so it’s all art. It all ties together.”