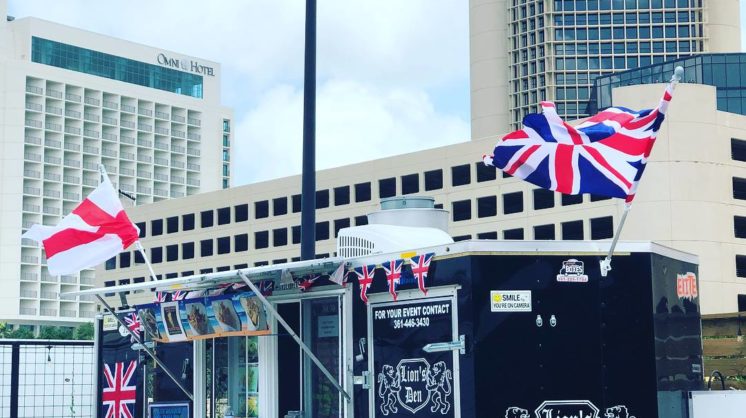 SPONSORED BY: BUS – Bar Under the Sun

The veteran-owned foodbrtruck, Lion’s Den, is a taste of authentic English cuisine. Dennis Cooper, the owner of Lion’s Den, was a member of the USbrCoast Guard until 2013 when he retired and took a position with the MilitarybrSealift Command based in Corpus Christi. Last year, when the Command Ship leftbrCorpus, Dennis found himself without a job. It was then he decided to embarkbrupon his passion for food and purchased the food truck that would ultimatelybrbecome Lion’s Den.

Cooper is originally from England and studied Hospitalitybrand Catering at Cambridge College, City & Guilds. And his accolades arebrcertainly apparent in the dishes he produces. The fish and chips are made with fresh Atlantic-cod. Thebrlabor-intensive bangers and mash aren’t affordedbrany shortcuts. From grinding the meat to stuffing in the natural casing to making the British gravy,brevery step in the process is handled withbrcare and precision.

His proprietary creation is the British Banger Burger. ThebrLion’s Den is the only establishment to serve this burger in the entire USA atbrthe moment. Made fresh from scratch daily, the British Banger Burger is thebrreal deal. Choose the “Ultimate” option and top your burger with an egg andbrHickory bacon for an experience that will have your taste buds thanking you.

Where Lion’s Den can be found next: