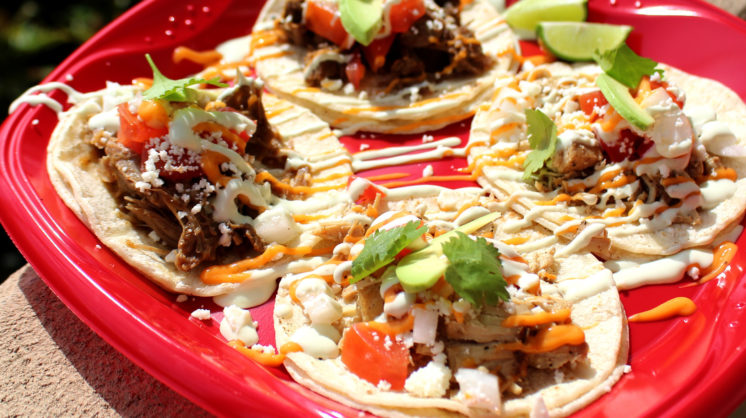 Ten years ago, if asked where he’d be today, Sam Silva, chef and owner of Jefe’s Mobile Cafe, would never have imagined he’d be standing here, serving some of the best high-class, high-quality meals this city has to offer—all from a small square window, aboard his very own food truck. In fact, Silva had a very different plan for himself.

“At the time, I was going to Texas A&M-Corpus Christi for chemical engineering, and I was about two and a half years in, when my brother decided he wanted to go to culinary school at Del Mar College,” said Silva. “My brother has always had a bit of a hard time, as far as studies go, so I figured that if I shadowed him, he’d have a better chance at success.”

At the end of their first semester, however, things had changed. Chef Silva’s brother had to drop out because his first child was on the way. Silva, on the other hand, was hooked.

“I had really found my passion. The instructors there at Del Mar really inspired me, and made me want to stay. I was originally only going for a culinary degree, but I ended up staying and obtaining three degrees from them.”

Three degrees, and ten years of culinary experiences later, Chef Silva opened Jefe’s Mobile Cafe (in October of 2017), and quickly gained a following. Since then, excitement for their menu grows with each new customer, pushing Silva to infuse familiar menu items with their own original twist. Drawing inspiration from early experiences cooking with his great-grandmother, and from the 2014 film, Chef, Silva wanted to deliver a more substantial experience from his mobile cafe, offering such mouth-watering, and popular items such as the Cubano sandwich, Slow-cooked Pork Carnitas, and gourmet street tacos. Their most popular food item, however, is their Gorbito Fries – a loaded, seasoned french fry, with homemade chili con queso, served with two of their signature sauces—the cream of chipotle sauce, and an avocado lime sour cream, with queso fresco, cilantro, and choice of meat. Is your mouth watering yet?

Silva is also proud of their “Chef’s Choice”—which isn’t on the menu. When a customer orders “Chef’s Choice”, they throw caution to the wind, and for $15, receive a high-quality dish, delivered directly from the chef’s whim. Whether it be a burger, taco, or specialty nachos, it’s guaranteed to be delicious. “We are just trying to separate ourselves from everybody else, and bring a little gourmet into the food truck industry,” said Silva. “We are here to stay, we are here to make an impact, and we will definitely be doing some big things here in the future.”

Where can you find them:

For more information on Jefe’s Mobile Cafe, and where you can find them next, find them on Facebook at facebook.com/Jefesmobilecafe/