Feeding Our Homies - The Bend Magazine 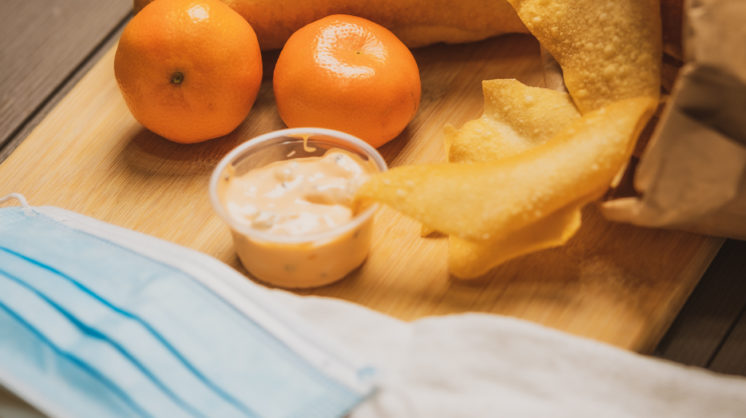 In March 2020 life as we know it turned upside down in the wake of a worldwide pandemic. Jobs were lost, businesses were closed, and people were frantically trying to figure out how to handle their current financial situations. Luckily, many people were granted unemployment benefits to help them during this crisis. For most, this money needed to be allocated and dispersed in a strategic way, as no one knew how long the pandemic would last, or more specifically how long the unemployment funds would last.

This was not the case with one individual, Cris Olvera. As he was preparing to leave San Antonio and move to New York City to pursue his dreams as a professional writer, the pandemic stopped him in his tracks and sent him back to Corpus Christi. Practically everything in the city was shut down due to the pandemic. Olvera, living off unemployment after being let go from his movie theater job, found himself in Corpus Christi with extra money in his pocket, but nothing to spend it on. Olvera considers his character to be that of a simple man who does not require expensive things. With a surplus of unemployment money still left over after taking care of his responsibilities, Olvera felt a sort of guilt that came with the government-provided cash. After sharing this feeling with a couple of his friends, they came to realize they all felt the guilt, which prompted them to act fast and see how they could repurpose the money back into the community. It was then that “Food for da Homies” was born.

“The authentic name Food for da Homies derives from a mix of certain components based around the general public’s view of homelessness,” Olvera says. “With a continuous status quo surrounding our community members, we wanted to give a more natural and hip approach to our less fortunate friends. The term homies refer to people living in our communities and hometowns.  The use of ‘da’ derives from my love of Spike Lee movies and the unconventional approach to the entire system that we apply.” One of the coolest aspects of this charitable community project is that Olvera not only takes the time to feed less fortunate people in the community, but makes conscious efforts to ensure his team’s meals are healthy, homemade, and nutritious. Olvera said he plans his menu around ensuring they will get carbohydrates, water, fruit, and plenty of sustainable protein. His team is able to make about 50 or so plates two times a month with money from himself, his partners, and donations they receive from the community. He makes it a point to divide these meals up and have drivers deliver them to four different sectors within Corpus Christi, so as to not leave anyone out.

Food for da Homies has been able to keep this community service going since the beginning of the pandemic, and hopes it can survive future economic transitions. In order to do so, they seek more volunteers from the community, accompanied with monetary donations. If you would like to be a part of this philanthropic work, please reach out to them directly though the Instagram page “Food for da Homies.” The group uses the platform to showcase the meals they’re providing for “da homies,” and as a means to get more people in the community involved. Sometimes help simply comes in the form of spreading awareness to one another, whether it be by word of mouth or sharing a social media post! This holiday season, we encourage you to give back to our local community, and Food for da Homies is a wonderful volunteer program to start with.
Contact:
@food4dahomies
cash.app/$Food4dahomies
Share