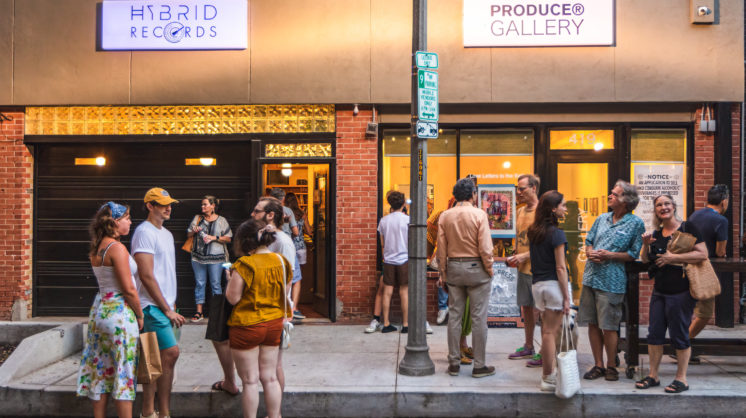 As the arts scene in Corpus Christi continues to grow, it is evident the local businesses in the area have come alongside to champion their efforts. The efforts are simple but incredibly special – to share local talent with the community. With the inaugural year of The People’s St. Music & Film Festival, this partnership is on full display.

Carlos Cooper of Hybrid Records along with Ceirra Riley of COMMONS and Carlos Villarreal of PRODUCE® and PRODUCE Gallery, commonly known as THE BLOCK®️, spearheaded this effort to “showcase the variety of talent South Texas has to offer while also being a free event for the community” says Cooper. After the success of the Fourth of July Peoples St. Block Party in 2021, the trio was inspired to create a weekend-long event to build upon this showcase of talent. “Carlos Cooper has worked so hard to make sure to secure local sponsorships so that while it’s a free event, it’s also on the level that everyone has come to expect from a Block Party,” says Riley. It was important that the integrity of the event remained consistent with the talent that the festival will celebrate, but still, be accessible to the whole community.

“I believe the festival will provide the city the opportunity to experience art, music and media in the heart of downtown and to introduce Texas makers to citizens of the Coastal Bend,” says Villarreal. This weekend-long event is the first of its kind in the sense that “it is a highly curated, interdisciplinary arts festival.”

“We are bringing some of the best musicians and filmmakers in South Texas spanning from Brownsville to Austin and everything in between with an emphasis on Corpus Christi artists, of course,” says Cooper. When speaking about the future of the event, “In five years, my hope is that this will be a destination for people all across the state to come to visit and attend.”

Included in the music lineup this year are Money Chicha, El Dusty, Moniq, New Ends and Up Dog, just to name a few. The Festival will run from October 7-9 in the heart of downtown Corpus Christi on People’s Street. The programming kicks off with a VIP mixer and film screening at The Art Museum of South Texas on Thursday, October 6. Heading into Friday, October 7, the festival begins at 5:30 p.m. with the Downtown Management District’s October ArtWalk along People’s St. soundtracked by the first round of musical acts featured in the festival’s lineup. In collaboration with the Oso Bay Biennial XXII, festival-goers might even catch a glimpse of the printmaking event’s special procession.

Saturday, October 8, will begin at 12 p.m. with film screenings on the Shiner Stage on People’s St. The music will begin at 5 p.m. on Saturday. Both Friday and Saturday will also include street vendors and food trucks. The festival ends on Sunday with a film awards presentation at BUS with live DJs from noon to 3 p.m. For the full schedule of events throughout the weekend, visit the festival’s Instagram page.

“This community is beyond talented, and we just want people to not only get to appreciate that, but you never know what might be sparked in someone when they get to see that raw talent that is already in their community, and willing to travel into their community,” says Riley. Music and film and art in all of its forms are essentially storytelling at its finest. Stories can reveal common threads, spark creativity, and quite literally bring people together.

The People’s St. Music and Film Festival will celebrate storytelling in its many art forms all while creating a gathering place for any and everyone in the heart of downtown Corpus Christi. It will certainly be a weekend you won’t want to miss! Follow @peoplesstreetfestival to stay up to date on all the festival happenings.