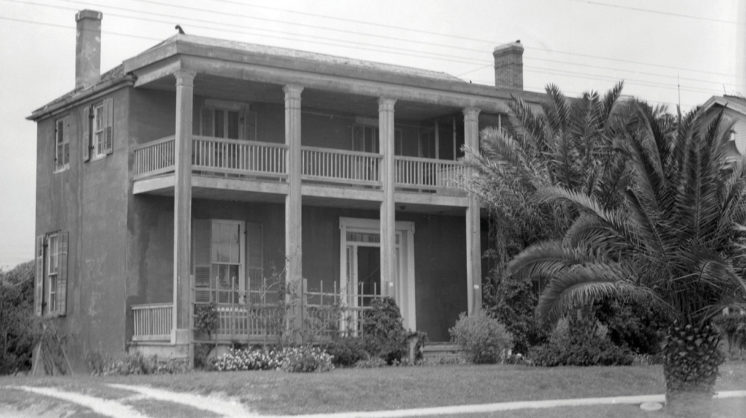 By: Jillian Becquet  Photo: Courtesy of the John Fred’k “Doc” McGregor Collection at the Corpus Christi Museum of Science and History

Nearing 170 years old, this house at 411 N. Upper Broadway holds the title of Corpus Christi’s oldest surviving home. The Britton-Evans Centennial House was built in 1849-50 by Forbes Britton, a statesman and business man who came to Corpus Christi with General Zachary Taylor during the Mexican War. Returning to the city to settle, Britton acquired the land from the city’s founder Henry Kinney. He built this Greek Revival style home on the bluff, overlooking Corpus Christi Bay. The home was built with a perfect view of the 170-foot long Mann’s Wharf, the city’s primary commercial pier, which was located near today’s Cooper’s Alley.

The house saw action in the Civil War as it served as a hospital and mess hall as both armies made their way through the city. After the war, it returned to use as a family home to a handful of Corpus Christi’s settlers and changes were made to the house, especially by the Evans family, who called it home for over 50 years. These included replacing the original spiral staircase and adding electricity to the home. Future tenants, including the offices of Southern Mineral Corp., benefitted from these upgrades as they occupied the building into the 1960s.
It now stands as a museum in tribute to Corpus Christi’s early beginnings. To literally walk in the footsteps of Corpus Christi’s history, the Heritage Society welcomes visitors for tours the first Sunday of each month from noon to 4pm.
Share