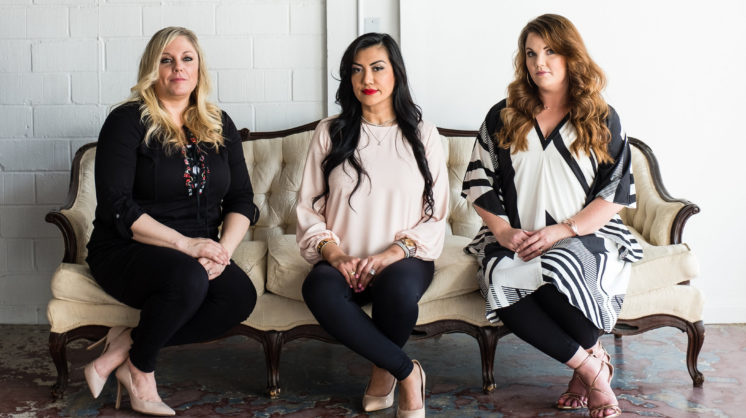 Nikki Riojas, owner of Thirteen and Market, a home décor and lifestyle brand, knows how it feels to move to a new city with a young family and not know anyone. She has done it twice.
Her first such experience occurred after moving from Nebraska to Louisiana. In Nebraska, she had not only built a career in corporate marketing but had also started a successful online custom jewelry and clothing business. In the meantime, she got married and had her son. Uprooting to a new state and unfamiliar city led to a sense of isolation.
Fortunately, Riojas soon discovered a local women’s entrepreneur group comprised mostly of out-of-state transplants. The most important thing to Riojas was the camaraderie the women shared. Each month they would meet and talk about their businesses and what they were doing at work. She went from not knowing a single person to meeting new friends with whom she still maintains contact.
When she and her husband, Andrew Riojas, moved to Corpus Christi over three years ago, her previous experiences helped her adjust quickly. She began reaching out to women business owners to form a group similar to the one she had joined in Louisiana. The Women’s Entrepreneur Society of Corpus Christi, which became an official nonprofit organization in February, was born after having its first meeting in July 2017. “We started talking about the Women’s Entrepreneur Society about a year ago. You know when you move to a new place, it’s just kind of overwhelming. And you add working from home into that and having a little kid,” Riojas says. She goes on to reflect on her memories of the Louisiana group. “It was just a casual group, but it was specifically for women in business who were not from the area. So, when I came here, I already had that mindset. That to feel more comfortable in a place I don’t know anything about, I need to connect with people. I love the connection aspect of it. So, I met a couple of women who also ran businesses and they are fantastic.”
Riojas’ new road was not without bumps. At first, many of the women she encountered were too busy to organize a group. However, she met one woman who owned a retail shop and another who worked out of her home. Riojas and her new friends decided to find a few more women business owners they liked and respected and whose products they admired. “I thank social media for a lot of these things. I already had a presence on social media through my business, so I was able to connect with a number of women-owned small businesses,” Riojas says. “We had no idea who each other were, but we were conversing and sharing each other’s products on social media.” Riojas suggested the group should find a day to get together once a month. At the first July meeting, before Hurricane Harvey, there were ten people. They started a private Facebook group and started adding people. The rule was that members had to be women and a business owner in town. It didn’t matter if the business was online, brick and mortar or both, but a member must have built or founded their company.

“It was really exciting to see how easy this was. These women, who are amazing in everything they do all day long, took time to sit and share and talk about their struggles, their exciting events that they have, and how we can partner with one another,” Riojas recalls. She has seen collaboration after collaboration as the group shares customers, contacts, and products.
“We are creating custom products for one another to sell. It’s definitely been beneficial for a storeowner because we are able to bring in revenue and help other small businesses do the same. But, we have this connection with everyone. We now have thirty in our group,” Riojas states. She wants to make people aware that the Women’s Entrepreneur Society is an available resource, regardless of whether someone already has a business or whether they want to start a business.

“If you don’t know where to start, maybe you aren’t doing it correctly quite yet. Let us help you get the resources to get you set up correctly. If you’re not taking sales tax yet, let us show you how can do that. It’s easy. We’ll provide you resources, and then you can be an active member in our group,” Riojas says.
Riojas invited Samantha Thurman, who owns an Etsy-based jewelry business, Alpacas Some Wine, to join. The two met at a popup store where Thurman was selling some of her jewelry a few months ago. Riojas walked Thurman through what was needed to start up a business.
“She gave me advice, and she said I needed to raise my prices. She said, ‘your time is money,’ and Nikki was adamant that I had to pay myself,” remembers Thurman.
Nancy Madsen, who owns the local do it yourself craft store, Oh My Goodness Boutique, serves as board vice president and treasurer of the organization. She sees the need for a resource like the Women’s Entrepreneur Society. “There’s not much out there for a woman business owner locally other than the Chamber of Commerce,” says Madsen, who is in the process of expanding her store and more than doubling its space. She says 90% of her customers are women who have home-based businesses making things, and they have no idea they have to pay taxes or how to market themselves. Madsen, who has a business background, explains that when she first started her business, she had plenty of questions but no one to ask.

“The organization was really needed. A successful business needs to know their surroundings. It’s a safe place to ask questions for the ones who don’t know,” Madsen states.
To be considered for membership, the business must be legally established to do business in the state of Texas. According to Riojas, the business owner will likely get access to about sixty women in Corpus Christi and the surrounding area that are willing to grow and work together.
The memberships are tiered. The Founders Membership is for those who have been in business for a certain amount of time and who meet each month. The General Membership, with meetings
four times a year, is set up for educational purposes. For young women or college students who are thinking about starting a business of their own, an Associate Membership is available. Riojas wants to keep business talent in Corpus Christi.
“I think people hear the ‘shop small philosophy’ and they don’t really understand that when you buy from a small shop, your money stays in this town. Your money goes to fix those roads and goes to the education system. Your money stays here. So, we’re grateful. We obviously love every dollar that comes in a small shop, but we also know that the benefits of that are longer lasting, and they impact the entire community,” Riojas explains.
Among the many benefits of an organization like this existing, probably the most exciting one is to see women business owners banding together instead of only seeing each other as competition. They build one another up, cheer each other on, and use other group members as resources to further their businesses. Where there could be rivalry, there is love, and that is priceless.
________________

For more information about the WESCC, go to wescc.org and make sure to join them for their Spring Gift Market at BUS on April 28th at 11 AM.