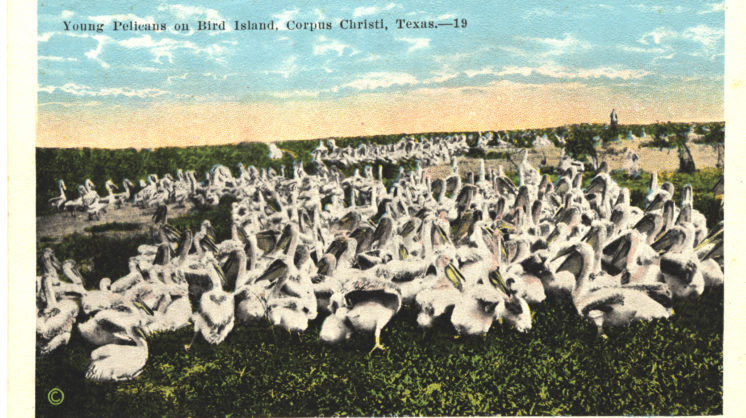 When we stroll the bayfront and see white pelicans swooping down for a snack, we don’t think anything of it. They’re a constant presence in Corpus Christi, but that’s actually extraordinary.  The traditional breeding grounds of the American White Pelican lie above 40 degrees north, the dividing line between Nebraska and Kansas. Only a few recurrent nesting grounds have been documented south of this line.

One of these breeding populations has been studied by generations of scientists on Bird Island in the Laguna Madre, off Padre Island. Here, a non-migratory population of white pelicans has made its home. One theory is that they may have originated when a few birds didn’t migrate north to their traditional breeding site. So, they stay around Corpus Christi through migration and nesting seasons in late spring and early summer.

Over the last 100 years, local scientists have been charged with visiting Bird Island to observe the number of adult birds, nests, and hatchlings. The birds are protected by the Migratory Bird Treaty Act of 1918, but that doesn’t stop habitat loss, boats, poaching, entanglement in fishing gear, and the draining and pollution of wetlands from threatening their nests and their safety.  Monitoring of this population is important to make sure we keep them safe.

When you see a white pelican during breeding season this spring, think of how special it is that we get to see them year-round in Corpus Christi – and make sure you’re doing all you can to keep our shore birds safe.