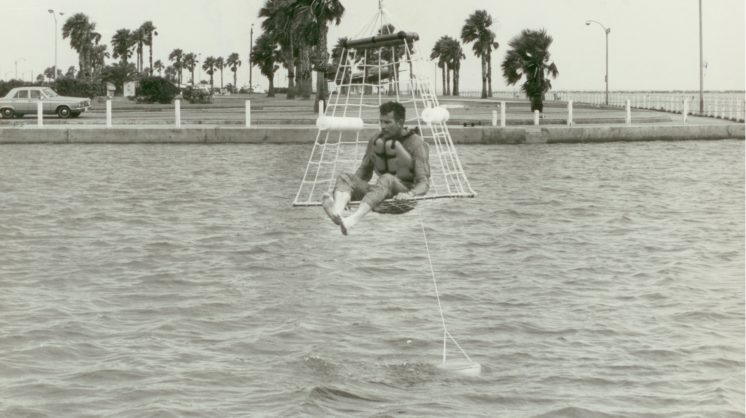 In the 1950s, Billy Pugh saw the dangerous methods of transferring personnel on and off drilling platforms when he worked offshore. After tragedy struck during one of these transfers, Pugh shared his invention of a cone-shaped net with a metal ring for standing, which would allow for safe personnel transfers. He founded the Billy Pugh Company to produce them in Corpus Christi, and their use boomed in the oil and gas industry, drawing national attention.

At the height of the Space Race, America put enormous resources into exploration and putting a man on the moon. But they didn’t just want to get the astronauts there; they had to get them back to Earth safely. Once the Apollo capsules were bobbing in the ocean, NASA needed a product that could assist the Navy with hoisting astronauts easily into a helicopter. NASA approached Billy Pugh in the early 1960s to design a water recovery system for the astronauts, and the X-872 Helicopter Rescue net was born.

Called simply a Billy Pugh net in news media, these yellow nets are clearly visible in Apollo rescue footage as astronauts are hoisted into Navy helicopters. Rescue nets from the Apollo missions are currently in the collection of the Smithsonian Institution, and on display at the Corpus Christi Museum.