All for One and One for All - The Bend Magazine 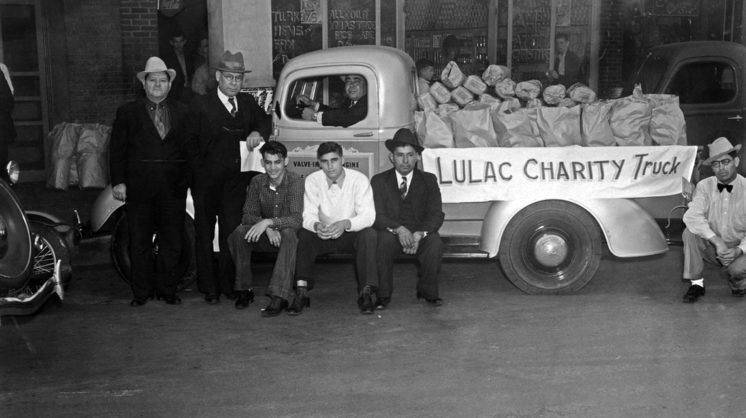 Words by: Jillian Becquet  Photo: Courtesy of the John Fred’k ‘Doc’ McGregor Collection at the Corpus Christi Museum of Science and History

Photo Caption: LULAC supporters gather around their charity truck, filled to the brim with food to distribute, on December 30, 1937.


The League of United Latin American Citizens (LULAC) has a storied history that starts in Corpus Christi in 1929. As terms of the Treaty of Guadalupe Hidalgo ending the Mexican War, Mexico’s northern border became the Rio Grande River, instead of the Nueces River. The approximately 75,000 Mexicans living north of the Rio Grande were now American citizens.

This transition did not go smoothly. Mexicans and Mexican-Americans were denied the most basic human and civil rights. LULAC is “united” because many organizations had sprung up to address these issues, but they knew they would be stronger together. Ben Garza became the new organization’s first President and the organization got to work.

While we learn court cases like Brown v. Board of Education in school, we don’t learn that the same fight was happening in our own back yard. In 1948, LULAC filed Delgado v. Bastrop ISD, which ended the segregation of Mexican-American children in Texas. In Hernandez v. State of Texas, LULAC attorneys fought for and won in a case to allow Mexican-Americans to serve on juries in 1954. Dozens of court cases, thousands of community meetings, classes, voter registration drives, and other efforts by LULAC have helped make tremendous strides toward equality for all.

These efforts aren’t just something we can look back on. They’re happening now. Organizations like LULAC are still standing strong for what they know is right—equality for all—and they still fight for it every day, strengthened by those South Texans who gave them a solid foundation in 1929.