A Walk Through Time - The Bend Magazine 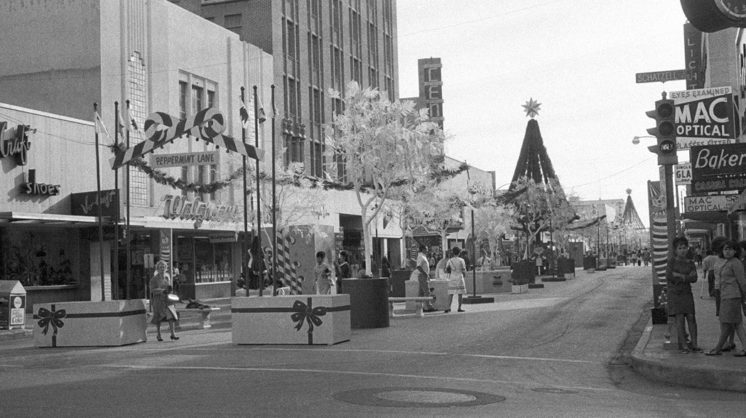 Words by: Jillian Becquet  Photos: Courtesy of the John Fred’k ‘Doc’ McGregor Collection at the Corpus Christi Museum of Science and History.

Long before South Side shopping malls, Corpus Christians were drawn to the shopping district on Chaparral Street each year with Christmas décor and Santa Claus. Santa’s home base was Peppermint Lane, which, in 1966, included four blocks of Chaparral Street pedestrianized for a month for the occasion.

The stores got into the holiday spirit with special window displays and Lichtenstein’s Department Store billed itself as “Your Peppermint Lane Gift Store.” Planners said the attraction would have “the most elaborate decorations in Texas history.” Crowds found multiple large Christmas trees, with stages below that played host to an array of entertainment throughout the season.  City busses even joined the festivities, and were decorated with stripes as they shuttled the crowds from parking lots to the center of the action.

There was something for everyone during visits to Peppermint Lane, from art shows to music to novelty acts from around the region. 1960s children may remember riding the miniature train and other rides brought in for the occasion.

Santa’s entrance was even given its own Corpus Christi flare. Most towns receive their visit from Santa as he arrives last in the Thanksgiving Day parade, but Peppermint Lane’s Santa parachuted into Corpus Christi Bay! He had plenty of time to take special requests from the children, and answered mail left in mailboxes from those who couldn’t make their request in person—all while readying gifts for Christmas!