A Pink and Green Gem - The Bend Magazine 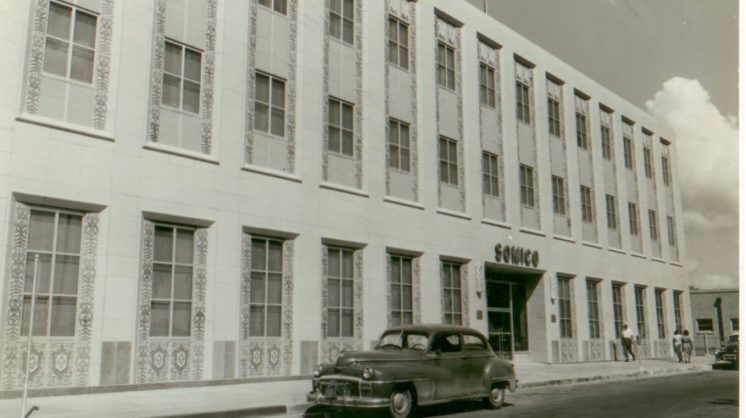 Looking into Corpus Christi’s uptown, it’s easy to just gaze up at the taller buildings across the skyline – but if you look a little lower, the pink and green terra cotta stands out. Built in 1953 for the Southern Minerals Corporation, known as Somico, 807 N. Upper Broadway has retained its signature exterior through both multiple owners and decades of vacancy. Many locals remember when this building served as the H-E-B headquarters from 1971 to 1985.

Southern Minerals President S. Maston Nixon was a proponent of the city’s growth, and wanted Somico to stay “home” in Corpus Christi when it outgrew its headquarters at the Centennial House. He enlisted Fort Worth architect Wyatt C. Hedrick to draw plans for the structure that would be unique to Somico, including input from Nixon himself. Original plans called for the ability to expand the building upwards to 10 stories, in increments of two-, then five-story additions. These expansions never occurred, so the building we see today is as it was built in 1953, pink and green terra cotta and all.
Since 2000, the building has changed hands several times but never found permanent occupants. As renovations move forward in 2020, we may soon again be able to enjoy the unobstructed view of the Bay that Nixon chose for his company’s headquarters nearly 70 years ago.
Share