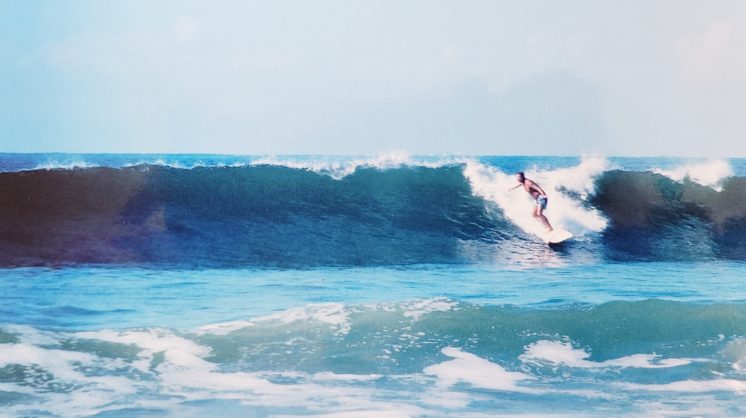 The Texas Surf Museum is one of those South Texas institutions that grabs the heartstrings of locals and tourists alike. One of the main must-see attractions in Water Street Market, the Texas Surf Museum has been honoring the history and culture of Gulf Coast surfing since 2005. However, the inception of the local surf community took place well before the 2000s.

While many non-Texans might think our neck of the woods, like our whole state, is mostly grazing cattle and oilfields, Corpus Christi’s coastal living flips that notion on its head. While there has always been a strong surf community here, it was catapulted to the forefront in the late 1960s and throughout the 1970s, thanks in large part to two-time Texas Gulf Coast Surfing Champion and living legend Pat Magee. Magee surfed on the prestigious Dewey Weber Surf Team, named for a leading surfboard manufacturer in southern California, and competed in the United States Surfing Championships in Huntington Beach, California, among many other notable accomplishments in the world of the waves. When the term “surf culture” is used – which nowadays may be thrown around casually – it is referring to an approach to living that goes deeper than just highlighting a hobby. Magee played an integral role in personifying this by being the poster child for surfing as a lifestyle. Usually on a whim, Magee would periodically jet off for a 4-day weekend, fly to Guadalajara, and take a chicken bus to the west coast of Mexico to San Blas and surf.

Likewise, if there were times anyone wanted to schedule a meeting with Magee, it would be tentative based on the day’s surf conditions. If there was surf, he had to go surf. And in this way, people grew to see passion personified through Magee’s desire and dedication to the surf lifestyle. Magee was a fundamental player in popularizing the sport in Texas and introducing Texas surf culture to rest of the country, and the world as a whole. In 1967, when Magee was just a junior in high school, he joined his buddy Mike Lee in renting out floats and boards to locals in a small building at the dune line along the beach in Port Aransas. By 1969, he set up his own shop after buying Island Surf Shop at the corner of Beach and Station Street – and thus, Pat Magee’s Surf Shop was born. Magee hit it big with this business, where he had everything from surfboards to boogie boards (known as rubber surf rafts back in the day), and sold all sorts of island-life apparel like swimming suits and flip-flops. Because of his history with the Dewey Weber Surf Team, he made a deal with them to purchase all of the trade-in surfboards for his rental business. The genius in this was that Magee wound up being the only retailer offering California name brand boards in the Coastal Bend area.

Following this trend, he later introduced popular surfwear brands like Hang Ten and O.P., which were also exclusive to his shop. These unique offerings quickly led to Pat Magee’s Surf Shop gaining major notoriety and a band of loyal customers. Word spread even to travelers who were coming to the coast to experience the Texas surfing scene, and just the magic of Port Aransas in general, and who knew immediately where to get the best rentals in town. Pat Magee’s Surf Shop also hosted events that brought in famous surfers from around the world, including the annual Robert August Weekend, and sponsored local surf contests and events. Suffice it to say, the presence of Pat Magee’s Surf Shop, and really Magee himself, not only helped nurture the South Texas surf scene, but brought it to life.

Take Robert August, of The Endless Summer fame, for example. Magee met August on a surfing trip in San Blas, Mexico. The pair created an instant connection, and August would go on to bring his legendary surf team, consisting of countless surf icons, to Magee’s shop for annual promotions. The Texas surf craze was alive and well, and thanks to Magee, a huge portion of it existed right here in the Coastal Bend. At the height of its success, Magee’s retail business had close to a dozen Pat Magee’s stores across Texas in San Marcos, Austin, San Antonio, Dallas, Padre Island, and College Station. Like many other businesses that had been thriving during the 1980s, the decline of the oil and real estate markets made staying afloat financially difficult. However, the original Pat Magee’s in Port Aransas kept its doors open for 35 years, until Magee and his wife, Mary Lynn, decided to retire in 2005. The Pat Magee brand remains an iconic symbol of Texas surf culture.

By the 1970s, surf culture was on fire. It didn’t take much for people to equate a beachside town with watersports, but it was more than that. The competitive surf arena was gaining traction and a dedicated surf community made riding the waves serious business. This also meant many pieces of what would later become token memorabilia came through the shop doors, and eventually became what we now associate with iconic surfing moments on the Gulf Coast – many of which are now located in the Texas Surf Museum.

Together with Brad Lomax, owner of Water Street Restaurants and the Texas Surf Museum, Magee helped to populate the museum with boards, photos, tools, newspaper and magazine clippings, you name it. To this day, the walls of the museum are lined with surfboards which tell a rich history of moments worth encapsulating for years to come. The Pat Magee Exhibit & Collection at the Texas Surf Museum draws fans and tourists from around the country because of Magee’s status as a famed figure in the Texas surfing world. One of the most popular exhibits curated for the Texas Surf Museum was the tribute to the 50th anniversary of Bruce Brown’s surf movie The Endless Summer. Legendary filmmaker Brown, renowned surfboard designer Mike Hynson, and surfing gurus Robert August, Robert “Wingnut” Weaver, and Paul Straugh, were all in attendance for the opening of the exhibition in May 2015 – a full 50 years after the documentary was released.

But Magee’s involvement in the art world doesn’t end there: In 1999, he organized the Surfin’ Art exhibit at the Art Museum of South Texas. The exhibition was a celebration of surfing art, aesthetics, and subculture that featured paintings, sculptures, and photography inspired by surf culture, made by surf artists. The artists on view included Rick Rietveld, Drew Brophy, and Peter Schroff. This wildly anticipated show opened in the summer of 1999, with surf rock legends The Ventures – who helped define the sound of “surf rock” at the peak of its cult following in the 1950s and 1960s – headlining the exhibition preview. To this day, Magee and his wife Mary Lynn are still very active in the Corpus Christi surf community. The annual Robert August weekend takes place the first weekend of June to celebrate August’s birthday and his contributions to surf culture around the world, as well as his connection to Magee and the Corpus Christi surf community. It’s a longstanding event people look forward to every year, when museum-goers and fans of Magee and August can get one-of-a-kind vintage surf gear signed by both iconic surfers. And the best part is, having legendary status and incredible influence only adds to the desire to meet a cool surfer dude like Magee and hang out with him – which isn’t such a far-fetched idea. Magee can be found hanging around the Texas Surf Museum or around town when he and Mary Lynn aren’t off enjoying the retired life between Punta Mita, Mexico, Port Aransas and Goliad, Texas.

Just like the rare, vintage finds Pat Magee has accumulated for his personal surf collection, and those that are now on view at the Texas Surf Museum, Magee, too, is a rare specimen at the center of what made the Coastal Bend’s surf craze what it is today.