A Flagship for the Arts - The Bend Magazine 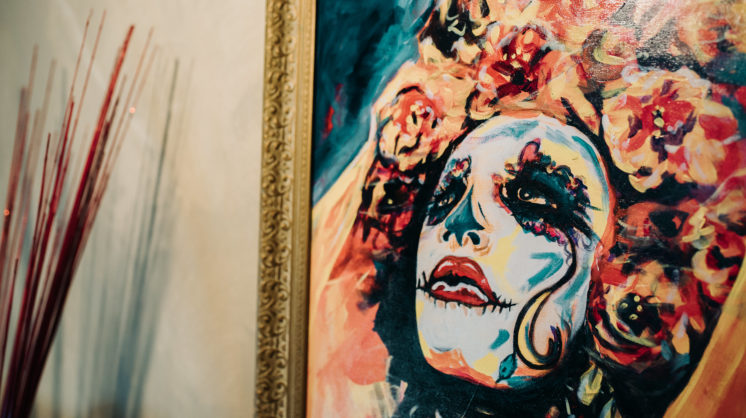 La Cueva Art Gallery & Gathering is the first step the city of Portland, Texas, is taking to evolve its urban fabric by developing an Arts and Entertainment District. Owners Gaye and Gil Cuevas are establishing the “flagship” addition to the new district with the first multi-artist gallery in the area.

The idea stemmed from the desire to showcase Gil Cuevas’s artwork. After researching the current art scene in Corpus Christi and the surrounding area, the rules to abide by were not in tune with the Cuevas’s desires. “I didn’t want to give my husband’s artwork away to people. And I didn’t want anyone else to be in control of it other than him,” Gaye says. After unsuccessful attempts to find the right space to obtain their goals, the Cuevas family decided to open their own. The old platitude of “if you want something done right, do it yourself” strikes a poignant chord here.

With aspirations to create their own gallery, the Cuevas family began talking to Portland’s Mayor, Cathy Skurow, and city manager, Randy Wright.

“They were incredibly helpful and explained the future the city hopes to develop,” Gaye says. She showed tremendous gratitude for their help and underscored her appreciation for their support. “They were so kind and so helpful that this project would not have become a reality without them.”

The city is producing more opportunities by creating more space for shops in the district, increasing walkability, and adding open-air markets. With the advent of mixed-use zoning, Portland is taking steps toward more modern urban planning with hopes of engaging and attracting people.

With La Cueva being the catalyst for the Arts and Entertainment District, Gaye aims to give back to the city she and her family have called home since 2004. “My desire was to create this [as] a cultural destination, and we want local artists to show their work here as well.” La Cueva is always open for local artists to find a home.

The gallery, which opened its doors to the public in December 2020, already has terrific work on display. Alongside Gil Cuevas’s beautiful paintings are work done by world-renowned Chicano artist and Robstown native Adan Hernandez, for whom the Cuevas family has vast amounts of appreciation and respect.

Hernandez’s career as a Chicano artist promoted his culture. It garnered international attention after director Taylor Hackford commissioned Hernandez to create the paintings for character Cruz Candelaria in the film Blood In, Blood Out. Most notably, the beautiful mural at the end of the film can still be seen today. The film catapulted Hernandez into the Chicano art movement’s forefront, making his work valuable pieces for collectors – notably including Richard Anthony “Cheech” Marin.

Hernandez and Gil Cuevas were friends in high school while attending Edgewood High School in San Antonio. Their work being housed in the same gallery can be seen as a representation of that friendship. Though no longer in the same city, their work symbolizes their influence on one another throughout life.

The configuration of the gallery space is impressive. In fact, noticing its renovation, I was informed that La Cueva was actually the Cuevas’ home. Reappropriating the family home into a gallery and gathering space was “a labor of love,” says Gaye. Every day was spent repainting and restaining the house to be ready on time for their grand opening.

La Cueva features 3,000 square feet of beautiful, historic interiors and an open-air deck with a grandfather Texas oak cascading cool breezes down on the festivities, day or night. Brad Brown is the resident musician playing live music on Sundays and the occasional Saturday. The gallery also houses a superb restaurant. With sunnier days ahead of us, the outdoor patio paired with the delicious food prepared by the Cuevas family will make for an excellent outing.

The duality of the space allows more agency to host private events. With two private dining and meeting rooms, La Cueva can serve as a venue for intimate weddings or personal celebrations, and provide first-class facilities for any occasion. I had the privilege of eating lunch while touring the facility, and the food was utterly delicious. The crème de la crème was a chocolate mousse made from scratch. La Cueva’s kitchen aims to provide the highest quality of food for its visitors. Everything from the menu is prepared from scratch; they even have access to their own garden for fresh herbs and vegetables.

Learning about the Cuevas family and how they manifested their goals was thoroughly inspiring, and left me invigorated and excited for the Coastal Bend’s future. Seeing an opportunity to create a space that works for them to showcase Gil Cuevas’s work opens a new opportunity for local artists to bring their talents to the forefront.

The Cuevas family is full of surprises and enjoy keeping busy, from running a law firm to a gallery and maintaining a garden for their restaurant while putting sweat equity into their newest venture. The city of Portland has great plans in store. If La Cueva is an example of what is to come, the efforts and care Skurow and Wright are pouring into the new Arts and Entertainment District will help the results be nothing short of incredible.