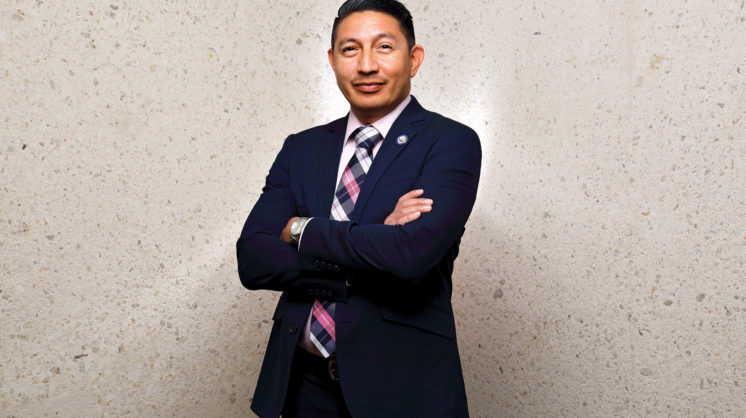 Ben Molina is building a solid foundation—figuratively and literally. Molina, City Councilman of District 2, has been involved with city street repairs, a superior water system, bond projects and numerous other improvements.

His career as City Councilman has been as fascinating as his journey leading up to it, which includes him being a small business owner, volunteering with Habitat for Humanity and later becoming a board member, being in a Leadership Corpus Christi class and launching his campaign for Councilman that unseated the incumbent.

The vision, drive and dedication that led him to local government are exactly how he’s accomplished so much since taking his position.

“One of the very first conversations I had with the city manager at the time was about water boils, and how we needed to invest in our infrastructure to fix that issue,” Molina said. “When it came to what was needed, I said, ‘Let’s do it, let’s fix that issue.’ We made some substantial improvements to our infrastructure, and I’m proud to say that we now have a superior rated water system.”

The street repair project to which Molina has also been committed was realized in a 5-year plan developed in 2020. The funding is set up such that when streets are repaired, new ones are added to the list—resulting in more street reconstruction when compared to previous decades. The Staples Street renovation, for example, is on the very last segment of repair in the Del Mar and Baldwin area.

In addition to these necessities for living brand working, Molina has also made Corpus Christi a better place to play. The Pier at Cole Park was a vision realized with a grand opening ceremony in December 2021. He spearheaded other park improvements, such as the splash pads.

It’s already a lot of progress in a short amount of time, because he’s energized and motivated by helping those who call the Coastal Bend home.

“I love the people here. I really do,” said Molina. “Corpus Christi has some of the most caring and giving people. I love doing what I do because I’ve got this small window of opportunity where I can effect change and improve the overall quality of life for our neighbors.”

Looking ahead, Molina wants to continue serving Corpus Christi, with visions for enhanced transit, infrastructure and parks brand recreation. We’ll hope to see many of these plans unfold in the coming years.