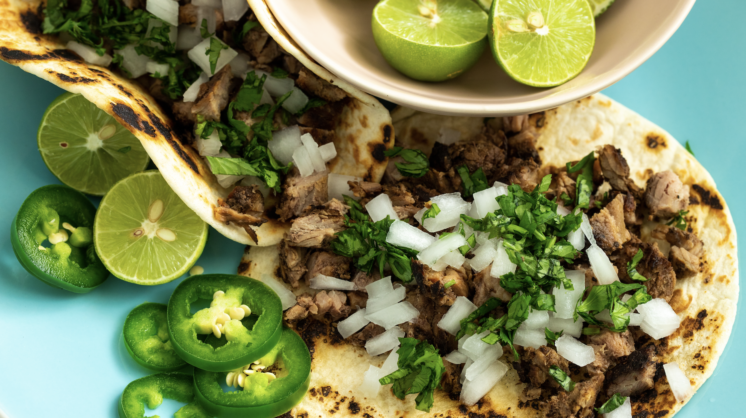 Vianney’s Rodriguez’s first memory in the kitchen is—as one might guess after having even just one conversation with her—completely centered around her familia. Rodriguez takes me back in time to her abuelita’s kitchen, where she is hiding under the table watching in awe as her abuelita and mami lightly pinch the empanada dough together with apparent ease.

“My abuelita caught me looking,” Rodriguez remembers. “She patted the chair next to her and showed me how to add the filling to the empanada disk, and how to pinch it closed with a fork.” Her fondest memory, Rodriguez explained that she can still so clearly smell her abuelita’s perfume, the cooked pumpkin filling, and the cinnamon all mingling together in the kitchen.

Just as her adoration for cooking began with her family, so did her unparalleled work ethic. Each morning when her papi would take the kids to school, he’d say “a trabajar,” as they hopped out of the car. “At the time, I didn’t understand this,” Rodriguez said. “But I clearly understand it now. We work hard for what we love. My familia y comida are my most treasured gifts. I work hard, I work passionately, I work with love to create a delicious life.”

Decades later, Rodriguez is now an award-winning cocinera, published cookbook author, cooking show host, recipe developer, and food blogger with a considerable and dedicated following. But to understand where the 2020 Southern Living Cook of the Year is now, we must look back at the journey that got her here—a journey filled with an unmatched love and admiration for the craft of preparing a meal.

Sweet Life, Rodriguez’s food blog, is at the cornerstone of that journey. In 2009, Rodriguez’s husband was completing his master’s degree while she homeschooled their children. In her downtime, she began to discover the realm of online food blogs; a wonderful world filled with colors and flavors and stories. Needless to say, she was hooked, but the more blogs she read, the more she realized all the stories, while beautiful, didn’t resonate with her. “Where were the stories and recipes of tias and tios and abuelitos?” she remembers asking herself. “Where were the dishes my mami cooked for us growing up?” Rodriguez noticed a void in Latinx representation within this scene, and ultimately decided she was determined to fill that void with her own recipes, memories, and culture. The very next week, Sweet Life was born.

With a DIY studio set up in the bathroom of their tiny apartment, she’d wait until the girls went to sleep and then begin her process—cooking the food, styling the plate, taking and editing the photos, she did it all. With each new recipe and story, she began to find her voice, style, and audience. She poured all of herself into every single step. Rodriguez knew that if she was going to do this, she was going to do it at 150% and no less, just as her father instilled in her as a child. “When I would sit at the computer to type out a recipe, I could hear my papi saying, ‘a trabajar.’”

Twelve years, hundreds of recipes, and over 32,000 Instagram followers later, Sweet Life is more alive than ever. Yet the heart of everything Rodriguez does remains the same: familia y cultura. From start to finish, every project Rodriguez works on involves her culture, from the flavors and spices to the childhood memories wrapped up in the recipes and the barro dishes she uses to plate everything. “My culture plays a huge role in my work,” she said. “It’s in every aspect of [what I do]. I want my readers to see who I am, where I am from, and the beauty of my culture.”

Whether you have the opportunity to hear Rodriguez speak about food in person or just by way of the blog, cookbooks, or social media, you’ll feel as if you’ve been transported straight into her kitchen. Suddenly, you too can practically smell the flavors she speaks of so tenderly. She talks about food as if she is writing a love letter to every ingredient in a dish—thanking them for their contributions and admiring their beauty.

Cooking is undeniably an art form, and thus entails a creative process. “My process is intense,” she  said with a laugh. From what I have experienced and learned from Rodriguez thus far, I would expect nothing less. She takes me through the steps, from recipe origin to the beautiful images you see on her platforms. When inspiration strikes, she sends herself text messages, including anything from flavor notes to ingredients. Those texts go on to become recipes that are tested and tweaked and tested again before ever being styled or photographed. The fruits of Rodriguez’s labor are undeniable. It’s a gift, really, to witness someone with as much talent and passion as she has exponentially excel at what they do. Her work exudes a joyous celebration of her life and culture in South Texas as a proud Tejana. Through her books (The Tex-Mex Slow Cooker and Latin Twist), new cooking show (“The Tex-Mex Queen”), and continuously mouth-watering blog posts and campaigns, Rodriguez is writing her own living love letter to Tex-Mex cuisine.

You see, for Vianney Rodriguez, comida is so much more than just food. It’s a tangible representation of where she’s from, where she’s been, and where she’s going. It’s years of hard work and late nights in the kitchen. It’s recipes and methods passed down from her family—creating a history book of sorts documenting her heritage and its signature tastes. It’s testing recipes for six months with six slow cookers permanently residing on her dining room table in order to write a book. It’s successes, but it’s also failures. It’s love and respect for ingredients and the role they play in shaping the culture. It’s everything … es la vida.